A Wellington West man fought 6-foot waves as he crossed Lake Ontario Aug. 22 to raise awareness about melanoma, a skin cancer. He also raised more than $138,000 for the Douglas Wright Foundation to help people fighting the disease. 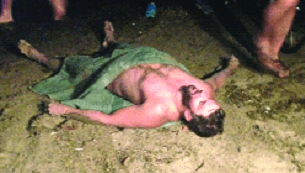 “The first part of the swim, the first two or three hours, were pretty tumultuous,” says Michael McIsaac, 32, a lawyer with Downtown law firm Beard Winter LLP. “They were up and down in terms of waves, probably about six feet.”

“I was really concerned for the safety of the crew at that time because it didn’t feel like it was ever going to stop. It was relentless pounding,” McIsaac said in an interview.

Four boats with a total crew of about 25 close friends and family accompanied him on his swim from Niagara-on-the-Lake (NOTL) to Marilyn Bell Park near Sunnyside Beach.

Eventually the pounding waves subsided, and McIsaac had time to contemplate his solitude. “We had this nice calm, peaceful night with no clouds in the sky. I got to swim under the stars which is a pretty memorable experience.”

McIsaac, who covered himself with Vaseline to protect himself from the cold water, wasn’t bored. “You would think that for such a long period of time that your mind would kind of wander, but what it really does is keep you focused on what you’re doing.

“You’re always thinking about that pain in your shoulder or you didn’t get a full breath of air so you’ll get one the next time. Then you see your friends go by (in the boats) and you start thinking about them and what they mean to you and some of the memories you have with them.”

At Marilyn Bell about 100 people welcomed him ashore. “There wasn’t a lot to be said,” said McIsaac. “There was a lot of cheering. Having been horizontal in the water for 22 hours I stood up for about ten seconds on the beach before I had to collapse from exhaustion.”

What does McIsaac plan to do next? “Take a break,” he said as he nursed significant shoulder pain.

The Douglas Wright Foundation was formed in honour of Douglas, McIsaac’s friend, who died of melanoma a few months shy of his 38th birthday.

2015-09-01
Bulletin Editor
Previous: Supper Club talks St. Lawrence at Sept. 28 panel
Next: Local animator is making a big ‘boom’ with his character BAM he is introducing at TIFF