Posted by: Bulletin Editor May 20, 2014 Comments Off on Pretty St. Lawrence lass to compete in hard-hitting Aussie Rules football cup 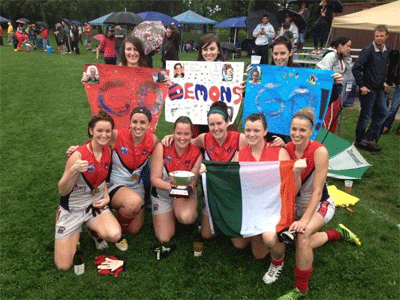 Heather Anne with her local team, the High Park Demons 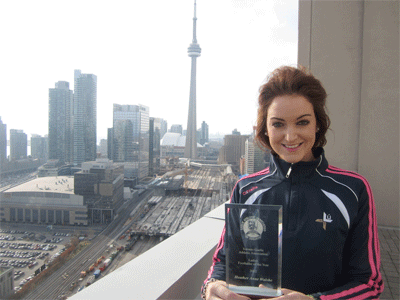 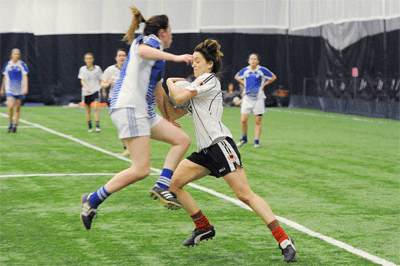 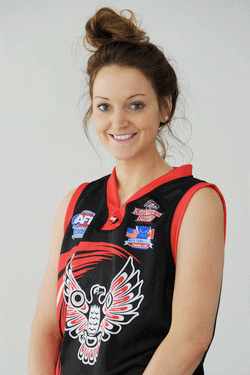 In November of last year I was lucky enough to have been selected to play for the Canadian Aussie Rules team who will compete in the International Cup, IC14, in Melbourne,  August 1-25.

Having only taken up the sport  in 2012 I was delighted and honoured to be selected.

My journey began in 2011 when so like many others I left Ireland and emigrated to St. Lawrence Neighbourhood. Growing up in the wee County of Louth (Ireland) I played a lot of Gaelic football for my local club The Newtown Blues, so I was excited to join a Gaelic club here in Toronto. I joined St. Mike’s ladies team and had a pretty successful first year winning the Toronto Senior Championship and being named St Mike’s Senior Ladies player of the year and Toronto Senior ladies player of the year.

I also tried my hand at Camogie, joining the Toronto Camogie club. Having never played the sport before I was a little nervous but am now loving learning the skill of this great game. We have had a lot of success as a club winning the New York and Cleveland 7s tournaments and the North American ladies senior camogie championship in Philadelphia. We were also fortunate enough to get to represent Canada in one of Irelands biggest Stadiums, Croke Park, as part of the Gathering tournament in 2013. It was a great experience and a huge honour.

I started playing Aussie Rules 2 years ago and have fallen in love with the sport. Having playing Gaelic football all my life I was able to use some of that skill set and incorporate them into the great sport of Aussie rules. I have been playing for the High Park Demons here in Toronto for the past 2 years where we have won back to back Ontario AFL Grand Finals. I was named MVP in the 2013 grand final and also received the toughest player of the year award, the Rob Valance award. I was later named onto the Ontario All Star 2013 team. I also took part in the 2013 National Aussie rules tournament in Ottawa where teams from all over Canada competed, it was a great tournament and was great to see how much the sport is growing throughout Canada, east to west.

I love playing Aussie Rules and I am super excited and honoured to have been given the chance to represent Canada at the IC14 in Melbourne in August ( I qualify for Canada through my recently obtained permanent residence status here).

I hope I can do my family and friends, teammates and Countries proud…..

This trip is funded entirely by the players themselves so any and all donations would be greatly appreciated.

2014-05-20
Bulletin Editor
Previous: Somebody is providing money and intelligence to Boko Haram
Next: Sistering Presents Funny Girls and Dynamic Divas