Why didn’t 2 of Jesus’ Disciples recognize Him?

Posted by: Bulletin Editor April 6, 2017 Comments Off on Why didn’t 2 of Jesus’ Disciples recognize Him?

“They didn’t recognize him because he was probably wearing raggedy clothes and it didn’t look like Jesus,” says Cory, 9.

Maybe his clothes were different. We simply don’t know. It’s possible, but I think there’s a more probable explanation. 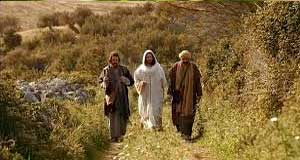 On the road to Emmaus

Bewildered, the disciples asked the traveller if he were the only one that didn’t know about the things that happened in Jerusalem. “What things?” Jesus replied. I would give anything to see the expression on Jesus’ face when he asked, “What things?” After expounding the Scriptures written by Moses and the Prophets concerning himself, they still didn’t recognize him. Why?

It’s true that there are earthly bodies and spiritual bodies, but is the appearance of the spiritual body that much different? When Jesus suddenly appeared in the midst of all his disciples, they didn’t have any problem recognizing him. In fact, they were scared out of their wits. At first, they thought they were seeing a spirit instead of Jesus in a resurrected body.

“Peace be unto you,” were the first words Jesus spoke.

The Bible tells us the disciples had hoped Jesus was going to redeem Israel. They were looking for a Messiah who would overthrow the Roman oppressors. They didn’t understand that the Messiah would conquer a much bigger enemy, death itself.

“Their eyes were restrained, and they did not recognize Him,” says Courtney, 9. That’s exactly what Luke says in his Gospel (Luke 24:16). But the question still remains, “Why?”

“They did not know him because their brains were thinking of that awful thing that happened in Jerusalem,” says Trip, 8.

My friends tell me that I have tunnel vision. Once my mental radar locks on an objective, I become oblivious to everything else. We all have this capacity to get into a mindset that blocks out what we don’t want to see.

In this case, the disciples locked onto the hope of seeing the Messiah set up an earthly kingdom in Jerusalem. A spiritual fog descended upon them when the Roman soldiers arrested and crucified Jesus at the urging of the religious leaders.

“The followers of Jesus weren’t looking,” says Michael, 7. “I guess they thought that Jesus was dead, and they couldn’t believe that He would come back,” says Jennifer, 9.

On the road to Emmaus

ing companion of women who had seen angels at Jesus’ empty tomb that morning. In spite of the angelic report that Jesus was alive, the disciples persisted in their sadness and unbelief.

After hearing their explanation, Jesus began with a rebuke: “O foolish ones, and slow of heart to believe in all that the prophets have spoken! Ought not the Christ to have suffered these things and to enter into His glory?”

Spiritual blindness is our natural state. We can walk through life and block out all of God’s signs and signals. Unbelief keeps the veil drawn over our eyes.

Jesus is alive, and he’s in our midst. But his appearance may not come in a form that you expect. Faith is the supreme act that can open your eyes to a realm beyond your five senses.