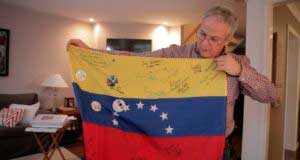 The film focuses on Daniel Salas, an educated surgeon from Venezuela who is unable to practice medicine in Canada, and speaks with him and his family about their immigration experience. (CNW Group/sisu production)

A visual storytelling media production company, sisu production, recently took home the bronze in the TVO Short Doc Contest for its short-form documentary, “I am a Doctor.” The film focuses on the struggle of immigrating to Canada as a professional whose credentials will not necessarily be recognized inside this country’s borders. The film focuses on Daniel Salas, an educated surgeon from Venezuela who is unable to practice medicine in Canada, and speaks with him and his family about their immigration experience.”I am a Doctor” delves into the challenges of having your hard work, and a component of your identity, be invalidated based on your geographical location—and the impact that such a shift might have on your family, as well as your own sense of self.

The film was awarded third place in the TVO Short Doc Contest and, as one of the three winning entries, was aired on prime-time television during The Agenda with Steve Paikin. Jaana Hein, head of production at sisu as well as director of the short, was also honoured by the chance to discuss the making of the documentary on the air with TVO’s Chantal Braganza. Hein’s background is in production, but the past few years have seen her move her expertise into a number of directing roles, and she was pleased to be able to talk about the process as part of TVO’s programming.
This win for “I am a Doctor” was the result of hard work and dedication from the entire team at sisu production. Executive producer Robin Ingle has always had an interest in storytelling, and he loves to highlight stories of human resilience that explore the issues challenging all of us—particularly when approached with a cross-cultural lens. “I am a Doctor” was the perfect chance to tell a story that hit on these points in a meaningful way, and Ingle is proud to see the film achieve success in the Short Doc Contest.
Cinematographer Ian Mationg was also vital in the completion of this short film. Having worked with sisu production for a couple of years, during which time he has lent his talents to numerous projects, Mationg is part of the dream team that sisu has built up to tackle the depth and variety of work that the company puts out.
Producing “I am a Doctor” was a rewarding experience for the sisu team, as it gave them the chance to delve into a salient issue and connect with it on a human level. With the win in the Short Doc Contest as validation of their hard work, the sisu team looks forward to putting more emphasis on the documentary genre in their future projects.
About sisu production: The origin of the name sisu production comes from the Finnish word sisu, meaning strength endurance, and determination. It speaks to the executive producer’s ancestry, and the head of production’s history as an athlete. Offering high-end media production services, sisu production tells stories through film and images. From that first bright idea to a beautifully captured moment to a message and story that is elegantly conveyed, sisu produces visual experiences that speak to every audience.
2017-01-02
Bulletin News
Previous: Winter Week skating this week
Next: A guide to understand the hotel star system