Regulating marijuana is a fool’s errand

Posted by: Bulletin Editor April 21, 2017 Comments Off on Regulating marijuana is a fool’s errand

The federal government’s plan to legalize marijuana is another nail in the coffin of Canada’s expensive and wasteful war on drugs. But at what social cost?legal pot

Former justice minister Anne McLellan, who chaired the federal task force on marijuana legalization, and Bill Blair, a former Toronto police chief, played key roles in the government’s new legislation. This forthright and responsible group examined the complex issues, listened to many concerned citizens, drafted their reports and made their recommendations.legal pot

The good news is that an absurd prohibition on pot is about to end.legal pot

The bad news is that Prime Minister Justin Trudeau’s Liberals have tied themselves in knots. 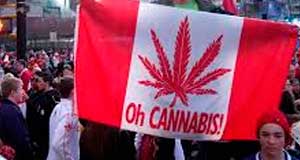 It’s impossible to legalize a presently illegal substance, protect youth from harm and stem the growth of Canada’s violent criminal underworld at the same time.

The legislation attempts to liberalize and regulate every aspect of the marijuana trade, including its production, distribution, sale and use.

Adult Canadians will be allowed to carry up to 30 grams of pot and to grow four pot plants at home (strictly for personal use). Possession by underage Canadians of a small amount (five grams) of legal pot will be a civil matter, not a criminal offence. However, there are also a host of draconian new criminal offences (with up to 14 years in jail) for those who sell or otherwise distribute pot to underage persons. There are also new, lengthy prison sentences proposed for even giving young people pot.

As Canadian youth are among the most prolific pot users on the planet, the most obvious consequence of the proposed legislation is continued growth in the criminal drug trade. That’s precisely the opposite of the intent. Even worse, we could soon be sending scores of middle-class Canadians to jail for decades when their children inevitably raid the family pot stash.

Drug gangs are no trifling matter. The global illegal drug trade is a $300-billion annual business. In many drug-producing regions, criminal empires have infiltrated the government and the police, creating a criminalized culture that threatens to totally overwhelm these vulnerable nations.

Regrettably, the proposed legislation also introduces another mission impossible for police, who will soon have a new host of unpopular and seemingly contradictory laws to uphold.

If we’ve learned one thing over the past 40 years, it’s that police forces are almost powerless in the face of widespread public demand for cannabis. The United States, for example, spends $50 billion a year trying to eradicate pot and other drugs. According to the U.S. Drug Enforcement Administration, they intercept less than 10 per cent of illicit drugs.

Certainly, the Mexican drug cartels and homegrown gangs don’t seem overly concerned. They are gearing up for what will become a boom market in Canada.

Will the Liberals do more harm than good by regulating marijuana?

How effective will police be in thwarting a legal drug when their plate is already full to overflowing? Among other things, they now will have to deal with people caught driving under the influence of marijuana, with enforcement tools that are so new and dodgy that they’re likely to fall on the first serious appeal.

The police will either retreat from this unpopular role (as they have in the past) or institute a reign of terror on the road, as the new legislation will make it much easier for them to use their powers.

This pot legislation demonstrates, once again, the folly of righteous government activism.

Have we learned nothing from the past? Legions of righteous people in the 1920s sought to use government to morally improve society through a prohibition on alcohol. The ultimate result (despite an almost total retreat on prohibition): a growing disrespect for the law in general and a host of organized crime syndicates operating with impunity.

Government using its legislative power in this fashion is a vain attempt to improve society. And the new law certainly won’t get rid of violent drug cartels.