Red wigglers don’t like the cold: indoor composting for kids

Posted by: Bulletin Editor February 9, 2016 Comments Off on Red wigglers don’t like the cold: indoor composting for kids 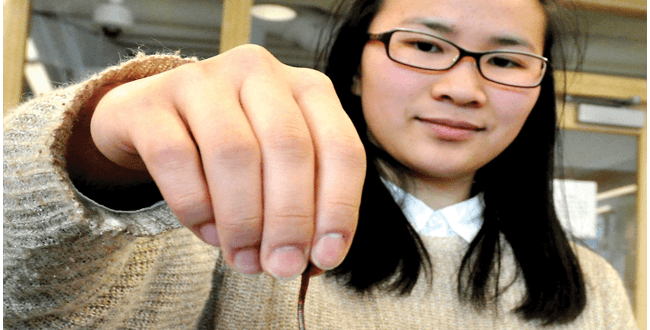 Lois with a red wiggler at Regent Park vermicomposting workshop.

Grades 2 and 3 students from Lord Dufferin Jr. & Sr. public school got an introduction to the icky business of vermicomposting—the art of turning worm poo into fertilizer—at the Christian Resource Centre in Regent Park.

The class was invited to the Centre at 40 Oat St. in January for a compost-bin-building and worm-sharing workshop hosted by the Regent Park Community Food Centre (RPCFC). It was supported by Toronto Compost Leaders, a network of groups promoting composting.

“They’re a little hesitant about the worms,” Lord Dufferin teacher Nori Miwa said about her students as they learned about vermicomposting. “They’re kind of scared about looking at the worms and touching them.”
Despite that, the children took a definite interest in how the red wigglers can help grow food.

“We’re learning about different sprouts they can grow in their own homes and as well take back to the classroom,” said Miwa. “As the students learn [about using worms to make cheap fertilizer] they can take it back to their parents. We’re going to try to have our own worm compost bin in the classroom. They’re very excited about it.”

The RPCFC, Dixon Hall and Green Thumbs Growing Kids are working to bring a community greenhouse and bake oven to Regent Park to grow fresh food and, in some cases, prepare it for neighbourhood events.
RPCFC runs five community gardens with more than 25 plots each. In all, about 200 people are involved with the gardens. Three of the gardens—on Sumach, River and Gerrard streets—provide produce for 155 families.

The centre holds an annual harvest festival for which some of the garden produce is set aside for a multi-cultural dinner. “It’s like a potluck party,” said Ashrafi Ahmed, RPCFC’s community gardens coordinator.

“Everybody shares their cultural foods.”
Sunday Harrison, executive director with Green Thumbs Growing Kids, showed the school children how sprouts are grown. “I asked them if they wanted to taste them (and) if they didn’t like the sprouts I said they could feed them to the worms. They got very excited about the idea of feeding the worms.”

Two bins at the workshop let visitors see tiny red wigglers crawling through thick, moist compost. Wigglers will eat egg shells, stale bread, coffee grounds, tea bags, fruit and vegetables—and even toilet paper rolls.
Worms are hermaphroditic. “All adult worms have both male and female parts. When two worms mate, one will form a cocoon in the folds of its body and that cocoon holds two or three baby worms. They’ll hatch in maybe four or five weeks,” Harrison explained.

Tiny red wigglers are better for composting than the larger earth worms, she said. But there’s a problem with wigglers—they can’t survive the cold—so they have to be brought inside for winter.
“I’m used to it (having red wigglers in the house), said Harrison. “I keep them right in my kitchen. If you put them too far away from yourself you’ll forget about them and they’ll dry up.”

Having them in the kitchen makes it easy to feed them; toss them fruit and vegetable scraps now and then. Harrison notes a pound of worms in a bin can eat a pound of food “a couple of times a week. They’re very hungry.”
To learn more about Regent Park’s community gardens and vermicomposting visit tcrc.ca.

2016-02-09
Bulletin Editor
Previous: How to buy your dream car
Next: Patient YQNA finally gets off-ramp and park on planning agenda