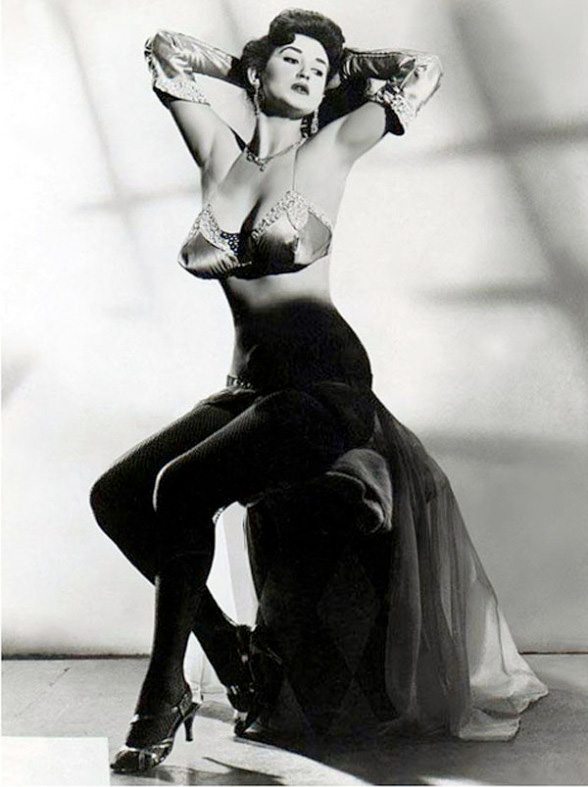 Toronto changed forever on Sunday May 28, 1961. The earth-shattering event that took place that day will be remembered as the watershed moment when Toronto, with its stuffy, professed Victorian morality, started to shift.

For it was on that date the great “Queen of the Burlesque,” Cup Cakes Cassidy (so named for her ample figure of 48-22-38) took to the stage to become the first stripper to shed her clothes on a Sunday in Toronto.

It might be hard to believe but at one time prudish Toronto’s “blue laws” forbade not only stripping on Sundays, but also shopping, pro baseball games, movies, restaurants, live theatre—any form of commerce or entertainment—was prohibited.

Even the big department stores like Eaton’s and Simpson’s had to install curtains on their outdoor display windows, for even window shopping on Sundays was seen as morally wrong.

Riding a streetcar was nearly banned on Sundays with authorities asking citizens to take a bicycle instead to church. This caused an outrage, even to the most pious, as it was thought to be a money-grab for the very rich because the Masseys made the bicycles and the Eatons sold them, often called by the wags of the day the Methodist Bicycle Company.

The Lord’s Day Alliance, in place to encourage churchgoing, wouldn’t even allow handing out the $25 prize for Best Bonnet in the annual Easter Day Parade at Sunnyside Beach. Thankfully things were starting to ease up at bit after the Second World War and by 1950 playgrounds were unlocked and the ban on spectator sports was lifted. Still, going to the movies and seeing live theatre were another matter.

Many Torontonians wanting to have some fun and excitement shuffled off to Buffalo for a weekend of cheap thrills.

Local theatre owners in Toronto realized the huge dent in profits caused by banning Sunday entertainment and managed to get a referendum on the next ballot. Thus, on Dec. 5, 1960, Torontonians voted overwhelmingly in favour of permitting movies and live theatre on Sundays. This led to a quagmire: although it was then seen a bit more respectable and legal to go see Cecile B DeMille’s epic movie The Ten Commandments on a Sunday, would it also be acceptable to see strippers as well?

Local historian Kevin Plummer, having written about this puritanical era in Toronto tells me: “While most were okay with Sunday theatrical performances especially at the more upscale O’Keefe Centre and Royal Alex, civic leaders tried in vain to exclude burlesque theatres from the eased restrictions. 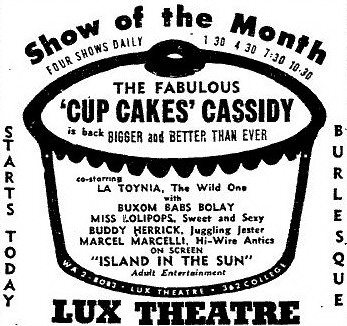 Ironically, the months of moralistic public debate aroused the interest of press and public in the striptease and booming business for burlesque theatres.”

Burlesque started to become popular after the decline of Vaudeville in the 1930s with the coming of talking motion pictures.

The few vaudeville theatres that were still in existence then began to present more risqué fare than the usual family-oriented entertainment that had made Vaudeville the preeminent form of entertainment in North America for the last 50 years.

Soon, what was once billed as an innocent Fan Dance became a little bit more provocative, and with that ticket sales began to soar.

Toronto, for all its perceived wholesomeness, was one of only a handful of North American cities to have three large houses of burlesques: the Casino (opened c1930) on Queen Street (now the site of the Sheraton Centre), the Lux (opened 1959) on College near Spadina and the Victory Burlesque (1961) on Spadina at Dundas.

The late 1950s and early ‘60s was golden age of the stripper and the queen of the striptease then was Cup Cakes Cassidy.

New Jersey-born Alice “Cup Cakes” Cassidy had achieve stardom at 19 after becoming a stripper two years earlier and with her husband as her manager, she earned about $1,000 a week in a time when $10,000 could buy you a 3-bedroom house in Don Mills.

To celebrate the new law allowing Sunday performances, Elliott Abels, owner of the Lux, brought in Cup Cakes, who was by then one of North America’s most famous strip-tease artists, for a special 1-day-4 show engagement.

The Globe and Mail reported, “The whistling and stomping, reached deafening proportions as, bit by bit, the 6-foot-tall brunette seductively shed her elaborate, jewelled gown.” With that Toronto changed forever for better or worse.

Two years after Cup Cakes left town, topless female go-go dancers were featured in local taverns like Yorkville’s Mynah Bird and the Yonge Street Strip, once a pleasant place to meet Aunt Agnes for afternoon tea, began its decline into a myriad of upstairs massage parlours and backroom strip clubs.

However Cup Cakes big night at the Lux would also pave the way for the musical HAIR at the Royal Alexandra Theatre in 1967 with its all-nude scene and message of love not war; which led the way for John and Yoko to feel comfortable enough to stay in bed all day at the King Eddy in 1969; which would lead the way to the demise of the Ontario Film Censorship Board in 1985; which ultimately led the way to the most liberal estate of them all, an uncensored Internet. And so to you, Cupcakes Cassidy, wherever you are, I salute you!

Phone 647-393-8687 or visit www.brucebelltours.ca for more info on these two special events.