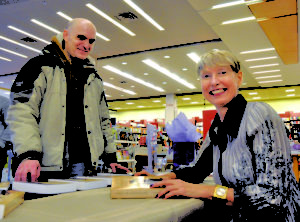 A first-time author from King West has based her debut novel on a true heist that took place at the Royal Ontario Museum and caused repercussions around the world.

Now her book is causing repercussions for her—good ones, in the form of pleased reader reviews on the internet.

Luba Lesychyn settled down to write Theft By Chocolate after a 20-year stint at the ROM where she served in the education and consulting departments and then in the Project Office.

She was in the Project Office when the Crystal was built. “I was the lucky person responding to people who either loved or hated that design,” she laughs after a book-signing session in February at the Richmond and John Chapters store.

Theft by Chocolate—described as a light, humourous mystery—tells the story of quirky heroine and chocolate-addict Kalena Boyko who heads to Canada’s largest museum as an administrator and turns into a sleuth to track down the culprit who stole the world’s oldest piece of chocolate from a Mayan exhibit.

Lesychyn based the plot on a real life heist of an opal jewel at the ROM in the 1980s. The thief was never found, but the jewel turned up many years later in a Hong Kong black market.

“In the first draft of the book I didn’t have that particular story line in there. It was during a third draft that I was reminded of this opal heist and it tweaked my imagination.”

“It (the theft) made an impact around the globe in terms of the way the heist was perpetrated. People found out how it had been done and security technologies around the world were at risk because of it,” says Lesychyn.

She received her first writing review at age 8 when her teacher read aloud one of her stories to his class.

“People laughed and I thought ‘that’s interesting.’ But I didn’t become a serial writer. I let it go for a pretty long time and came back to it much later in life,” says Lesychyn.

It was her passion for films that drew Lesychyn back to writing. “I’m a big film lover and I had started writing about my Toronto (International) Film Fest experience every year because I had a friend who was living overseas who used to go to the festival with me. I was basically blogging…before that term even existed.”

Over time more people were attracted to her film reviews. “The next thing I knew I had an international audience reading my yearly journal about the film fest,” she says.

“There’s something very satisfying about that, just making up your own little world and characters. It can be cathartic, too, because you can draw a lot of yourself into your story.”

There was an aspect of writing she hadn’t anticipated—public speaking. “I’m shy. Most writers are. We’re observers and so … you’re not thinking that someday I’m going to have to do readings of my book in front of people.”

Maybe it was her dad who gave her the gumption she needed. “My father was an amazing orator. He was very involved in the Ukranian community. I think maybe I inherited some of that,” says Lesychyn.

She has one and maybe two sequels in mind. “I’ve learned I’ve got the discipline it takes to finish a book. I’ve got the drive and desire.”