Primat satisfied with work in endurance series opening round

Posted by: Bulletin Editor April 21, 2014 Comments Off on Primat satisfied with work in endurance series opening round 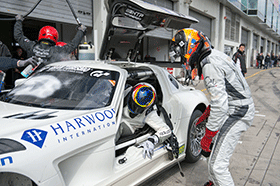 Germany’s daunting 25-kilometre-long Nordschleife played host to the cream of GT teams and drivers, all of whom were eager to put down a marker during the official qualifying race for this year’s blue riband Nurburgring 24 Hours. And it was mission accomplished as far as Primat, his HTP Motorsport squad and Mercedes-Benz were concerned after securing pole position for Sunday’s six-hour contest guaranteed their invitation to June’s twice-around-the-clock classic.

With over 170 corners just learning the ‘Green Hell’, let alone mastering it, is a process that can take countless races. And having already secured qualification, Primat’s primary aim was to continue building experience once he’d replaced team-mate Maximilian Gotz after the opening stint. 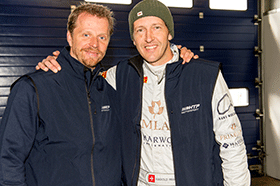 The Swiss ace maintained the German’s good work over the first half of his seven-lap run but subsequently struggled with tyre pick-up as a result of so many cars scrapping over a relatively narrow section of tarmac. Nevertheless, the SLS AMG GT3 he also shared with Kenneth Heyer and Roland Rehfeld was still running second overall approaching the final hour when a loose bonnet latch hastened the car’s retirement.

Despite losing out on a potential podium finish, to go with the second place achieved at February’s Bathurst 12 Hour, Primat remained positive about his and the team’s performance.

“It’s always disappointing to miss out on a good result but, honestly, we achieved everything that we needed to,” he said. “We’ve qualified for the 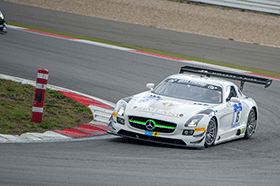 24-hour race, which was the primary reason for entering, demonstrated front-running pace and, on a personal note, gained more valuable experience of the Nordschleife. I’m not totally there yet but have certainly come a long way. Experience counts for an awful lot due to the length and individual challenges at various points around the whole lap. It’s not somewhere that I’d ever driven properly before last season and there’s certainly no substitute for seat-time. We’ll test there again, this time at dusk, later in the season when I’m aiming to improve even more. But the bottom line is we are competitive.”

His and HTP Motorsport’s focus now switches to this weekend’s Blancpain Endurance Series opener at Monza, Italy (April 12/13). Although just as historic as the Nordschleife, its super fast 11-turn, 5.8-kilometre layout couldn’t be more 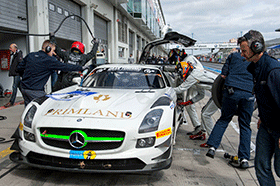 different from its German counterpart.

Primat is joined by Nico Verdonck and reigning Series champion Maximilian Buhk in the team’s Pro Cup-entered #84 Mercedes-Benz. And if recent testing form is anything to go by then the trio should find themselves at the sharp end during Sunday’s three-hour race.

“I think we should be there or thereabouts this weekend, although it’s hard to tell before the opening round,” added Harold. “Testing went well, we found a good set-up and the Pirelli tyres seem well suited to the Mercedes. Before the season my main aim was to focus on the blue riband endurance races, but I really think we have an excellent chance in Blancpain too. We finished second at Bathurst and were in podium contention last weekend, so let’s wait and see.”