Posted by: Bulletin News May 1, 2017 Comments Off on Ports Toronto sells Harbour Commission building: will be restored 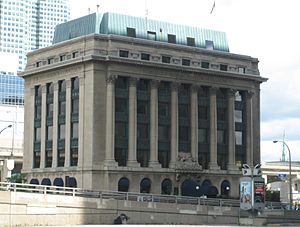 PortsToronto announced on May 1 that it has sold its property at the corner of 30 Bay and 60 Harbour Streets to Oxford Properties Group (Oxford) and Canada Pension Plan Investment Board (CPPIB), who will each own a 50 per cent stake.

The historic Toronto Harbour Commission building, which currently serves as headquarters for PortsToronto and is located on the site along with a surface parking lot, will be restored and maintained as part of any future development plan. The sale closed today and the transaction is valued at $96 million, a portion of which will be payable over the next three years.

The proceeds from this sale will be used to support PortsToronto’s federal mandate to manage operations on a self-sustaining basis in order to reinvest funds into marine safety, environmental protection, community programming, and transportation infrastructure. The federal Minister of Transport has granted an amendment to PortsToronto’s Letters Patent to enable the sale to close.

“The South Core is a burgeoning area for business and residential development in Toronto given its optimal location, public transit access and amenities,” said Robert Poirier, Chair of the Board, PortsToronto. “We are pleased that this sale will provide for future opportunities that will improve utilization of the property which is consistent with PortsToronto’s federal mandate and governing Letters Patent. Proceeds from the sale will go towards paying down debt and investing in infrastructure such as the repair of aging dock walls and warehouse terminals, building “last mile” road and rail access in the Port area, improving navigation in areas of the harbour, and supporting our corporate social responsibility program.”

“Oxford has been enthusiastic about this site since PortsToronto selected us as their redevelopment partner five years ago,” said Michael Turner, Executive Vice President, Canada, Oxford. “This is an exceptional piece of real estate and we will continue to advance the development of the site to maximize its value and associated benefits to the community.”

“This acquisition of 30 Bay Street fits well with our Canadian office portfolio strategy, which focuses on key markets such as Toronto,” said Peter Ballon, Managing Director, Head of Real Estate Investments, CPPIB. “The site’s proximity to a major transportation hub and a growing urban residential area make it an attractive future development site. We look forward to partnering with Oxford on this investment.”

The Toronto Harbour Commission building which currently sits on the property and serves as the head office for PortsToronto will be restored and maintained in any future development of the site.

“When the Toronto Harbour Commission building was constructed in 1918 it sat on the water’s edge as was fitting for an organization with domain over the harbour and its commercial activities,” said Geoffrey Wilson, CEO, PortsToronto. “Since then landfill has extended the waterfront south and situated this building on the edge of an expanding financial district. Selling this property has obvious financial benefits to our organization but it also has the benefit of better utilizing the property and ensuring that the building will be restored and incorporated into a new development for the enjoyment of future generations.”

Last week PortsToronto released its 2016 Audited Financial Statements and reported its ninth consecutive year of profitable growth. All four of PortsToronto’s core business operations – Billy Bishop Toronto City Airport (Billy Bishop Airport), the Port of Toronto, the Outer Harbour Marina and Property and Other – were profitable in 2016, generating $59.7 million in overall revenue, an increase of 4.5 per cent from the $57.1 million reported in 2015. Net income was up in 2016 to $6.7 million from $5.9 million in 2015.