Posted by: Bulletin Editor April 17, 2013 Comments Off on Porter violates airport deal even without jets

The current Q400, flown by Porter and Air Canada, offends the Tripartite Agreement’s definition of aircraft generating excessive noise on two of the three parameters and breach of any one prohibits the aircraft

The Toronto Port Authority (TPA) on April 17, 2013 is quoted in the Financial Post section of National Post as saying it “believes the CS100 is the only jet-powered aircraft that meets the noise restrictions at the airport.”

The TPA’s February 2009 PowerPoint admits that even the Q400 (flown by Porter and Air Canada) offends the Tripartite Agreement’s definition of aircraft generating excessive noise on two of the three parameters.

Breach of any one prohibits the aircraft. However, to date, the TPA has failed its duty to the public to enforce that prohibition.

Here’s page 26 from that PowerPoint: 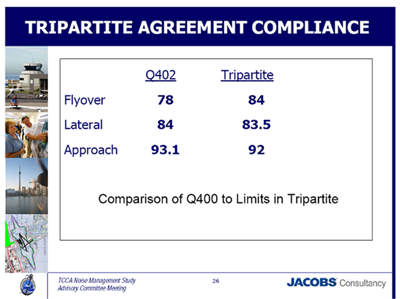 What are the stats for the CS100’s noise? According to Bombardier, the total of the three parameters (255) is lower than the total for “average turboprop” (about 256).

How does it then “meets the noise restrictions at the airport”?

The TPA has claimed it can average the breaches out, borrowing from one parameter that is not breached to address a breach of another. A tremendously weak argument: while that is permitted by the ICAO for compliance with the much weaker ICAO noise constraints, averaging is not contemplated by the Tripartite Agreement.

Nothing in the Tripartite Agreement permits totalling, or averaging.

Note the use of the word “or” in this relevant excerpt from the Tripartite Agreement:
aircraft generating excessive noise shall … include [those] which generate a noise level in excess of 84.0 EPNdB on takeoff (flyover), or in excess of 83.5 EPNdB on sideline at takeoff (lateral)to the flight path)or in excess of 92.0 EPNdB on approach.

The limits are the limits, and each stands alone. That makes sense – the limits address real concerns about noise, relied upon by the City in allowing the development of Bathurst Quay, and by all who have moved into the Bathurst Quay neighbourhood since they were put into place in 1983.

We need the breakdown of the three parameters for the CS100. As you’ve made the statement, you must have the data to back it up. Could you provide it?

As the data above suggest that the CS100 is considerably louder than even the excessively noisy (as defined in the Tripartite Agreement) Q400, you might correct your statement to the media, and suggest to Mr. Deluce that he do likewise.