Posted by: Bulletin Editor December 5, 2012 Comments Off on Porter Air is likely failing

Are you going to be on the hook for over $140 million Porter owes Toronto in back taxes and the costs of that ridiculous tunnel? 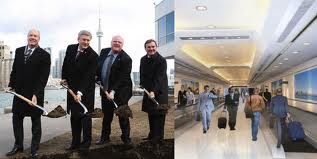 Bigwigs at the big dig. (Right) Proposed luxury tunnel to save 5 minutes off a ferry ride for the elite traffic at Island airport if it still operates when the $82 million hole is completed.

For the third month in a row, Porter Air at the Island airport has reported significantly lower sales. November sales are down 30% from their August peak, and were 12% lower than last November.

In 2011, sales dropped just 4% from August to November, reflecting seasonal variations. Sales (in revenue passenger miles) dropped from a high of 99.1 million passenger miles in August to 77.2 in September, to 74.2 in October, and to 68.9 in November.

Porter has always struggled to fill its seats – load factors (that percentage of seats that are sold) have always been in the 50-60% range – exceeding 60% only over the summer months, when it offers huge discounts for vacationing flyers. This year, load factors have fallen from
74.5% in August to 62.3 in September, to 59.4 in October, and 54.5 in November.

By comparison, WestJet’s load factor increased in November 2012 to 82.6% from 77.6% the year before. These figures come on the heels of news that Porter continues to struggle on its US routes. For the first five months of 2012 (data is only available six months in arrears) Porter’s load factors were only

WestJet is reported to be successfully targeting those markets in recent months.

Why is this happening, and what does this mean for our waterfront and its communities? Certainly, the massive traffic congestion at Bathurst and Queen’s Quay, has something to do with it. Porter’s traffic has to funnel down a narrow road between a park, two schools a community centre and a daycare. It’s no longer the convenient alternative to Pearson.

It’s not the economy – yet – as other airlines are doing fine. Porter relies upon last-minute business travel paying high fares, and then vainly tries to fill the rest of its seats with hugely discounted tickets. Given abysmal load factors, that strategy still isn’t working, it would seem.

Release of its financial information would be helpful. The one peek we got into Porter’s finances was in 2010, when its attempt to go public flopped miserably. At that point, its accumulated deficit, as at March 31, was $44.5 million. We’ve seen nothing that suggests there’s been any significant improvement in its financial fortunes since then. So clearly the chances of Porter failing are higher than they have been for some time.

We can, perhaps, begin to dream of finally eliminating the scourge on our waterfront that is the Island airport, and ensuring that whatever replaces it on those incredibly valuable 215 acres is far more compatible with the rest of our waterfront’s uses. Should Porter fail, one must ask who will be on the hook for the $82.5 million cost of the pedestrian tunnel now under construction? And the more than $50 million owed to the city in back taxes? We greatly fear that will be the taxpayer.

2012-12-05
Bulletin Editor
Previous: A world-class city doesn’t gamble with its downtown
Next: Help save Karen and other kids from the streets