For sale in Port Colborne, Ontario, is a one-of-a-kind retreat in a rare Canadian Carolinian forest:

It’s just steps away from the sandy beach on ocean-like Lake Erie.

The beach so resembles the high, rolling waves and setting of early Martha’s Vineyard that former Ivy Leaguers—living in Buffalo and its suburbs—built their cottages here in the 1900s.

Those elite Buffalo families settled in a large crescent-shaped shoreline of Port Colborne, Ontario called Lorraine Bay. It was in those days mostly an American enclave.

Many original families still have their cottages here and their descendants form the unique exclusive community called the Lorraine Bay Association which conducts summertime events such as tennis matches, picnics and softball games.

It also maintains the private road and antique stone bridge that leads from Weaver Road across a canal to (and beyond) the land known as The Bog at 1456 Firelane 1, Port Colborne, ON L3K 5V3. 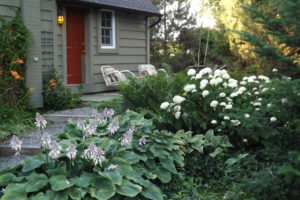 The Bog House is nestled in a Carolinian forest on 7.2 acres of mostly virgin land and is designated by Ontario as a Provincially Significant Wetlands. Endangered native plants are present here, along with massive maples and pines. Although it is on a peat bog, the land isn’t wet anywhere near the house.

It’s near a stop on the renowned Friendship Trail:

The Bog House is just a 3-minute bicycle ride up Weaver Road to the famous Friendship Trail which can take you directly into downtown Port Colborne, but also to Fort Erie, 16 kms to the east. It runs parallel to the north shore of Lake Erie.

Beginning at the Port Colborne border in the west, this relaxing and picturesque trail takes visitors through lush farmland, quaint villages, pristine watersheds, and quiet residential areas as it leads to historic Old Fort Erie, Lake Erie and the Niagara River Recreation Trail.

Much of the trail is located upon an abandoned rail line, meaning it is relatively level and smooth—an easy ride for children 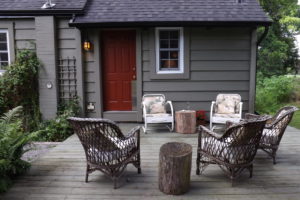 and adults alike. The trail is used by walkers, cyclists and rollerbladers in the summer, and hikers and cross-country skiers in the winter. Of course, the trail is also wheelchair accessible.

Providing views of the Buffalo Skyline on the horizon, the Friendship Trail extends 17 km east across picturesque Six Mile Creek and through quiet residential streets as it leads to historic Old Fort Erie, waterfront parks along Lake Erie and the Niagara River Recreation Trail beyond.

The majority of the trail is relatively level and smooth, making it easy walking and riding for children and adults alike.

Features of The Bog House: 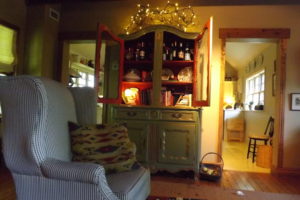 It comes fully furnished. All furnishings seen in the photos are included in the purchase price.

When it was bought by the current owners, The Bog House was an uninsulated 2-storey 1927 wood-frame cabin in the distinct Martha’s Vineyard architectural style. It was strictly for summer cottage and fall duck-hunting uses. It had 1 bathroom upstairs with 3 bedrooms. One, a “kid’s room,” was smaller and equipped with 2 bunk-style single beds.  A huge single bedroom is also on the 2nd floor, with room to add a fourth bedroom by running a wall in the centre. Sizes and features (and many more photos) are also available.

The current owners added a large ground-floor fourth bedroom and bathroom with a bubble-bath/shower-tub combo. It was placed where a dilapidated screened-in porch once stood behind the huge native stone fireplace and chimney. 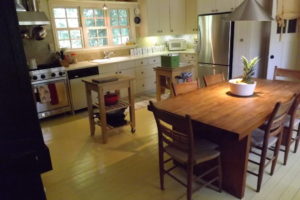 They created a large, well-equipped kitchen with a 6-burner Viking gas range and modern sink. They maintained the original painted wood floor, adding shelves, drawers and other kitchen paraphernalia.

The original Bog House had a containment tank that needed regular pumping out. The new owners spent $40,000 to build a state-of-the-art septic system that passed stringent Ontario environmental regulations regarding the sensitive forest where its drain field was built.

They insulated all the external walls to R40, installed a natural-gas furnace in 2014 and a forced-air air conditioner was online earlier. Inside The Bog House the temperature is perfect no matter what the season or outside temperature.

A full complement of television stations are available via satellite and two large-screen TV sets are located in the master bedroom and in the living room.

Learn more details about the house, including specific measurements by phoning 416-368-3071.

Features of the portion of the 7.2-acre property where The Bog House sits:

An approximately half-acre naturalized pond with fish and a flat-bottom aluminum boat adjoins the stone road leading to The Bog House. To the east a flowing creek runs along Weaver Road, past The Bog and into Lake Erie.

Aside from the grassy lawn, the property remains in its natural state, although that isn’t required by any level of government.