The dysfunctional Toronto Port Authority gave another example of how it richly deserves to die. But now it’s a Tory pork barrel since Steve decided the money-losing operation that’s too lucrative to die should be his. It survives by taxing Toronto residents and from lawsuit settlements or threats of lawsuits that taxpayers fund.

On its maiden launch, filled with celebs and media, the spanking new Pride of Pork passenger ferry crashed into the dock on the land side, ruining a smoke-and-fire 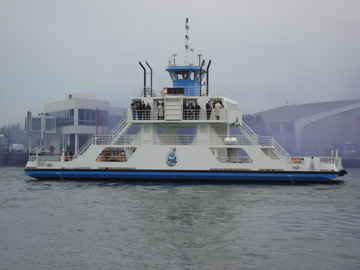 Control of the ferry was lost as a pilot suffered what some described at first as a heart attack, then later as an anxiety attack maybe caused by all the purple smoke that was deliberately set as part of the show. Here, it’s facing east and west. 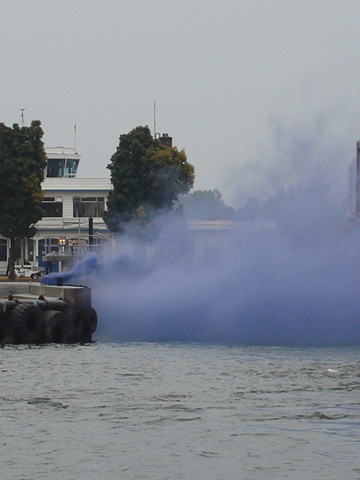 The smoke made the landing site hard to see. Fireworks were also supposed to go off, but folks were having enough excitement on board. 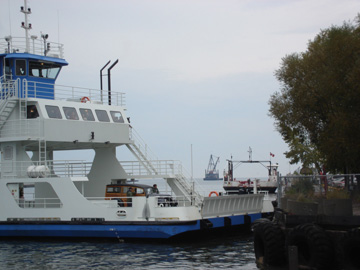 The ferry heads for the mainland dock and its maiden crash. 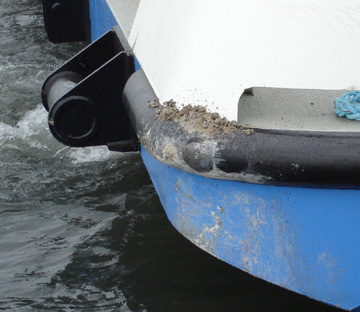 extravaganza the TPA had planned to showcase their ferry dream. It went in circles and at one point was headed west toward Hamilton, where there is a genuine port that makes money and does real business.

TPA, you’ll recall, had a dream of another ferry that would send passengers and container loads of goods trucking up Cherry Street from the even less world-class City of Rochester, N.Y. To the surprise of no sane person, the Breeze blew off because nobody wanted to go where it went—after Toronto taxpayers funded a $10 million terminal that’s useless.

The porkers this morning (Oct. 11) were lined up at the taxpayers’ trough to celebrate with nibblies and drinks the launching of ex-PM Paul Martin’s treachery that turned into a Steve Harper grabbag of goodies when the pork-loving Tories took over Ottawa.

It was a showpiece ferry to replace a cancelled bridge between the unneeded Island airport and the mainland. Martin pretended to support the city, which wants the airport closed, but behind our backs he dumped $35 million of our taxes into the port authority to make up for the canceling of a $22 million bridge.

That bonanza wrought Porter Air (only a consonant away from Porker Air) to what at least one airline expert, Mark Hill, predicts will be a brief life before crashing with profits flowing to Porter’s owner, Robert Deluce. Read that article here.

Hill is a founder of successful WestJet and wrote the business plan for that airline.

Hill—and others—speculate that Deluce could be pushing forward with grand plans for an airline that won’t fly—or won’t fly for long—in order to capture more tax money in reparations when it is grounded. We know that some of that $35 million in no-bridge money went to Deluce and is funding the current fiasco-in-the-lake.

But it might not be tax funds as a target Hill told The Bulletin in July, noting that there’s a reported $125 million war chest Porter claims is developed with money from OMERS, the pension fund for city workers in Ontario, and General Electric.

“There’s lots of money out there that’s looking for the flyer…they [venture capital funds] have so much money to place these days. Throwing $20 million or $10 million at something when they’re told it’s a 10-banger…they’re looking for a 10-times multiple [invested funds] on this stuff. Put in $100 million in 10 different things and some of them fly and some don’t. Some very sophisticated investors have invested in some pretty dumb airlines. Big pension funds went into U.S. Airways in the States and lost it all about three or four years ago. And Fidelity out of Boston is huge, huge…they put $25 million in JetsGo and everybody knew JetsGo was going down. It’s a gamble, like going to Vegas.”

Meanwhile, the tiny TPA (number 19 in the nation and the only money loser) continues to exist despite the desires of most citizens that it close down and that its assets and responsibilities be turned over to the City of Toronto.

2006-10-11
Bulletin Editor
Previous: Public Forum: What is really happening in Trinity-Spadina schools?
Next: Ballet takes successful ‘next step’ to future