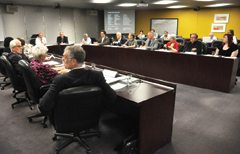 Staff in city departments should “flag” buildings and landscapes they think might be potential heritage sites because Toronto’s Heritage Preservation Services (HPS) is too understaffed to build a comprehensive inventory of them, and that has caused the loss of some heritage properties for good.

That’s what a heritage roundtable discussion hosted by councillor Peter Milczyn and Heritage Toronto heard at city hall June 6. The meeting was public but presentations were limited to speakers from a broad spectrum of the heritage community.

The impetus for the roundtable was explained in Heritage Toronto and the Toronto Historical Association’s joint report titled Heritage Voices. “The lack of staff and resources to build and maintain a comprehensive inventory had led to the loss of significant heritage sites,” the report reads. It continues: “The overarching message from consultations is that heritage resources are being lost in Toronto because of the lack of vision, political will, and resources for heritage.”

At the start of the roundtable, Milczyn conceded that heritage preservation in Toronto “hasn’t been as effective as we’d like it to be or should be.”

Madeleine McDowell, a former Heritage Toronto board member, said city departments could assist HPS staff with their inventory efforts by at least “flagging” properties they think are sites of interest.

To a comment that councillors need to be educated about the importance of Toronto’s heritage McDowell said “I couldn’t agree more. Council needs an education—desperately.”

Mary Louise Ashbourne, chair of the Etobicoke community preservation panel, said departments should understand that helping save Toronto’s heritage should also be on their list of things to do.

Architect and urban planner Antonio Gomez-Palacio, who played a role in drafting Toronto’s 2007 heritage management plan, said the parks department for example might not think heritage is part of its workload. “But it absolutely is,” said Gomez-Palacio.

Paul Bedford, a former chief planner for Toronto, talked about using “carrots” in the form of tax benefits to encourage private business to restore old buildings, something that’s done in the United States. “It’s an area we’d be well advised to look into. It’s a win, win, win scenario.”

Michael McClelland, a founding member of the Canadian Association of Heritage Professionals, said innovative taxation methods have been successfully used in the States. Gomez-Palacio said restored historic buildings lead to increased assessment and increased rents to the city.

Lloyd Alter, past president of the Architectural Conservancy of Ontario, said the public “hasn’t bought into the message of heritage.” He said it’s “an on-going struggle” to convince owners that a heritage designation is good for their properties.

Property values in Cabbagetown have increased seven per cent since it was designated a heritage conservation district, said Alter.

Gomez-Palacio said preservationists need to sell the idea of heritage to the public the way environmentalists sold the idea of going green. He said businesses today are proud to be part of the green movement.

“There’re a lot of great lessons to learn in terms of the (environmentalists’) strategy. We need to instill a sense of pride around heritage matters,” said Gomez-Palacio.

Ashbourne called on city officials and developers to be creative about incorporating heritage buildings into new developments. “A little more imagination could be applied to these projects.” She said cases where old and new structures have been combined “has turned into truly something wonderful.”

McDowell also advocated for the preservation of Toronto’s natural heritage saying some city trees go back to the “original gene pool. The city has no policy to protect natural heritage. It’s crucial that Toronto recognize this essence of itself, and it is not happening.”

McClelland said he wants to hear a change in building owners attitudes when they call and worry that they’ve got a heritage building.