Posted by: Bulletin Editor December 22, 2013 Comments Off on Pic ends 2013 with major silverware haul in Bahrain

Arthur Pic ended his 2013 season with a clutch of silverware after securing a race victory and five further podiums from two MRF Challenge rounds at Bahrain International Circuit. 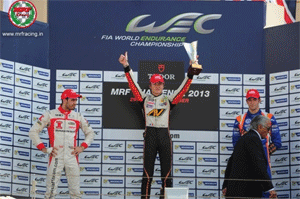 The Renault-backed driver started race one from second spot having narrowly missed out on pole to chief rival Tio Ellinas, but a good launch drew him alongside the Cypriot on the run to the first corner. As they jostled for position Rupert Svendsen-Cook was able to capitalise and move into the lead, before Pic went side-by-side with the Briton only for Ellinas to snatch P2.

A safety car was soon deployed following an accident further down the order, and Pic made the most of the subsequent restart by diving past Ellinas and back into second. The Frenchman then set the fastest lap of the race as he hunted down Svendsen-Cook, but with Ellinas still close behind Pic was forced to keep one eye on his mirrors and settle for second.

Pic’s star performance of the weekend came in race two. Lining up fifth on the partially reversed grid, the Frenchman didn’t enjoy the best launch but pounced around the outside of turn one to assume second spot.

Immediately closing on the rear of race leader Yudai Jinkawa, Pic was able to assume P1 when the Japanese driver ran wide at the start of lap two. From there Pic was unassailable, controlling the pace at the head of the field to secure a comfortable and deserved victory.

Ellinas began the weekend’s final race from pole, but another textbook start from Pic propelled him into the lead as the cars negotiated the opening sequence of turns. The pair then went wheel-to-wheel for the next three corners before Ellinas prevailed to re-take top spot.

Their battle was not over however, as Pic again snatched the lead on lap two. Ellinas was in front again next time around, and would hold off a determined Pic to the flag.

The second Bahrain round (20/21 December) saw Pic take a hat-trick of podiums, only for a DNF in the weekend’s final race to prevent him securing a strong result in his last outing of 201

Ellinas started race one on pole, with Pic fourth behind Svendsen-Cook and Belgium’s Sam Dejonghe. After struggling early on he upped his pace to overhaul Dejonghe, then went in pursuit of the leaders. Pic soon found his way past Ellinas only for the Cypriot to quickly re-take the position. This allowed Svendsen-Cook to pull away, with Pic chasing Ellinas home in third.

Pic started fourth in Friday’s sprint race, but lost out at the start and slipped to seventh as the cars exited turn one. However an excellent recovery drive saw him quickly climb the order on his way to another runner-up finish at the flag.

Saturday’s feature race saw Svendsen-Cook on pole alongside Ellinas, with Pic starting fourth. Once again the Frenchman quickly took third to join the usual suspects at the head of the field, hunting down second-placed Svendsen-Cook. Pic attempted a pass on the final lap but narrowly missed out, coming home third for what was his sixth successive podium finish.

The weekend’s final race saw Pic form part of a hard-fought battle with Harry Tincknell and Renan Guerra. Unfortunately the Frenchman would be eliminated from proceedings early on when Guerra hit him from behind, terminally damaging Pic’s car and bringing an unfortunate end to his 2013 season.

Arthur Pic: “Above all, the two rounds in Bahrain were an excellent opportunity for me to gain experience of the circuit, which will be very important next year as it hosts the opening GP2 race of 2014. It was also good to be fighting at the front and stay sharp, as usually we don’t do much competitive running during the European winter.

“The first weekend here was great: I was pleased to get another win and take three podiums. The second wasn’t quite as positive, though we still had competitive pace. However there seemed to be less consistency between each set of tyres, which held us back. It was also frustrating to be taken out of the final race through no fault of my own.

“But I’ve enjoyed battling with Tio and Rupert, both of whom are really clean racers. I’m not sure whether I’ll do the next MRF round as it depends on my GP2 commitments for early 2014. I’m close to signing a deal to race there next year, and I’ll announce my plans as soon as this is sealed.”