Posted by: Bulletin Editor November 28, 2010 Comments Off on Path to Riverdale paved with good donations 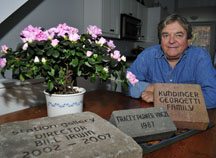 Brown heads up a citizen’s initiative to raise money for new pathway paving in Riverdale Park. He has co-opted another park’s successful brick-naming campaign for the Cabbagetown greenspace. With the support of the city, people will be able to “buy” their own bricks, which will line the refurbished paths in the park.

Brown, a long-time Cabbagetowner, has run the Riverdale Park arts and crafts sale every festival weekend in September for the last 22 years. Recently, the poor condition of the paved pathways in the park had dawn his notice.

In spring 2010, he heard about a project in Glen Cedar Park (in the Bathurst and Eglinton area) that allowed people to sponsor bricks along the resurfaced pathways. He put in a call to organizer Lee Grundberg, who provided Brown with the names of the right contacts and suppliers.

The idea, Brown explains, is to replace the crumbling asphalt pathways in the park with concrete paths. (Interlocking brick, he notes, is no longer used as it has been found to sink unevenly and is “a nightmare” to maintain.) The inscribed bricks are an individualizing feature.

The arts and crafts sale donated $5,000 towards the initiative, while the city’s parks, forestry and recreation department has pledged $10,000—but much more will be needed to completely repave the walkways. The brick sales, Brown hopes, will cover the remaining costs.

Donors can inscribe two lines on a 4” by 8” stone for $100, or a minimum four lines on an 8” by 8” stone for $150. A corporate size—and price—may eventually be made available. Donors may request that their name, their family’s or business’ name, or the name of a loved one or pet be inscribed on the brick.

A charitable receipt will be issued by the city for the donation, less costs. The deadline for purchases is March 1, 2011, and Brown hopes that the city will begin the project in the spring.

“Glen Acres found that they didn’t get as much participation as they’d have liked until the project was complete—and then as soon as they saw it, everybody wanted a stone. We hope it will work out differently here, although it’s possible the city might do it in stages as it’s a larger project. But don’t take any chances—order now, it’s a fine Christmas gift!”

In addition to running the Arts and Crafts sale and initiating the Bricks project, Brown and his partner Meg, a recent immigrant from Leaside, have found a new home—a petite and charming semi-detached mansard workers’ cottage in the Wellesley and Sumach area—and are busy settling in and renovating. Inscribed sample bricks occasionally find their way into the living room, at least until the pathways project is done.

To assist with the project, guarantee yourself a spot in Cabbagetown history (or geography) and keep Meg and Randy’s living room brick-free, contact www.cabbagetownartsandcrafts.org for more information and a copy of the order form.