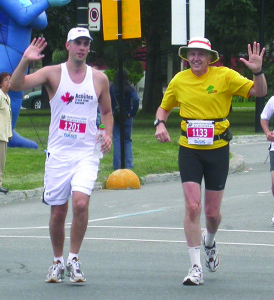 Michael Ovens may have lost most of his sight to retina pigmemtosa, but he never lost sight of the finish line in the Achilles St. Paddy’s Day Race.

Ovens received the news of his degenerative illness in 2003 and to this day, his sight continues to diminish.

As Ovens’ condition worsened he became more and more uncomfortable running on his own to the point of stopping altogether.  Friend, Brian McLean, race director of the Achilles St. Patrick’s Day Run/Walk, noticed Ovens’ decline in running and encouraged him to run with the Achilles group.

“I just stopped running because I didn’t feel comfortable doing it anymore,” the 35-year-old, Ovens, told The Bulletin. “I knew Brian McLean just before it happened and he noticed that I just stopped running and he brought it to my attention. Brian got me to come out to the Achilles Saturday runs and linked me up with two running guides. I had never actually run more than 5K. Having guides took a lot of stress away and I ended up doing my first 10K and then three months later doing my first half marathon.”

Ovens’ current challenge is to coordinate and find enough running guides but the time and effort have brought many friends into his life and now half of his friends are runners.

Ovens, who terms himself partially sighted, is not limited to running races. He started the organization Cycle for Sight in 2009. The event included visually impaired people riding tandem with a sighted person for long distances raising money for charity. It started out with a few riders travelling 160K from Toronto to Collingwood. On the inaugural ride it rained the entire way and Ovens thought it would be his first and last event.

“It’s funny, the first year it actually rained,” said the Jarvis and Wellesley area resident. “It rained the whole way and when I got to Collingwood I was thinking we’re done. On the bus ride home I was utterly exhausted and didn’t even have enough energy to speak. 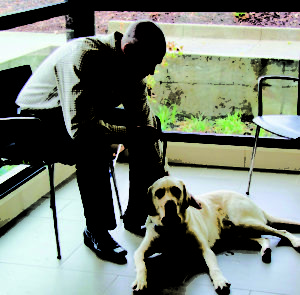 I was listening to everyone’s comments on the bus and everybody was talking about what a great time they had and how they were totally going to come back and do it again next year.”

The next year participant numbers tripled in size and since 2009 the event has raised over $1.6 million. Now fully sighted pairs want to join as tandem teams and this year’s ride is estimated to have approximately 400 riders.

Ovens’ condition continues to deteriorate and he currently runs tethered to his running guide, which is another step in his evolution of running.

In September Ovens was happy to receive a guide dog named Finley, a 72 pound; yellow Labrador that changed his life.

“When I got Finley my walking sped up so much that in two weeks I had really sore legs,” reflected Ovens. “Previously walking with friends I would yell at them to slow down; now it’s reversed. It’s great. My commuting around the city has been cut in half. I really enjoy going out now.”

Information on the Achilles St. Paddy Days race, taking place March 16 can be found at www.achillesstpatricksday5k.ca and Cycle for Sight information is available at www.cycleforsight.ca.