PAL presents PWYC play by locals: Behind the Door

Posted by: Bulletin Editor August 11, 2015 Comments Off on PAL presents PWYC play by locals: Behind the Door

It happened at PAL, the Performing Arts Lodge in Toronto (110 The Esplanade), when two artists, Pam Hyatt and Marguerite Andersen, got together to create a short play, Behind the Door, about an actor reflecting on her past glories, age and consequent lack of roles.

Pam Hyatt, the actor, has entertained Canadians from coast to coast since 1958. Trained classically at RADA in her youth, LAMDA in her mid-century, Hyatt’s talents have graced stages at Stratford, the Royal Alex, cabarets, clubs, film and television. Her 2012 CD, PAMALOT! is a favourite of JAZZ-FM’s Jaymz Bee. You can catch her act at local clubs when she’s not engaged in theatrical motifs.

Marguerite Andersen, the writer, has published twenty books, written mostly in French. Le figuier sur le toit (2009) and La mauvaise mère (2014) were awarded Trillium Book awards. Translated into English, La mauvaise mère will in 2016 be published by Second House Press. Behind the Door was included as “Derrière la porte” in Les crus de l’Esplanade (1998), a short story collection. A play, Christiane: Stations in a Painter’s Life, was performed in 1996, at the Factory Studio Café as part of the Women’s Theatre Festival, The Gathering.

followed by a discussion of the play and its subject.

Refreshments will be served. The performance is sponsored by the Pal Place Residents Association. Admittance is free.

Donations to the PPRA are invited. 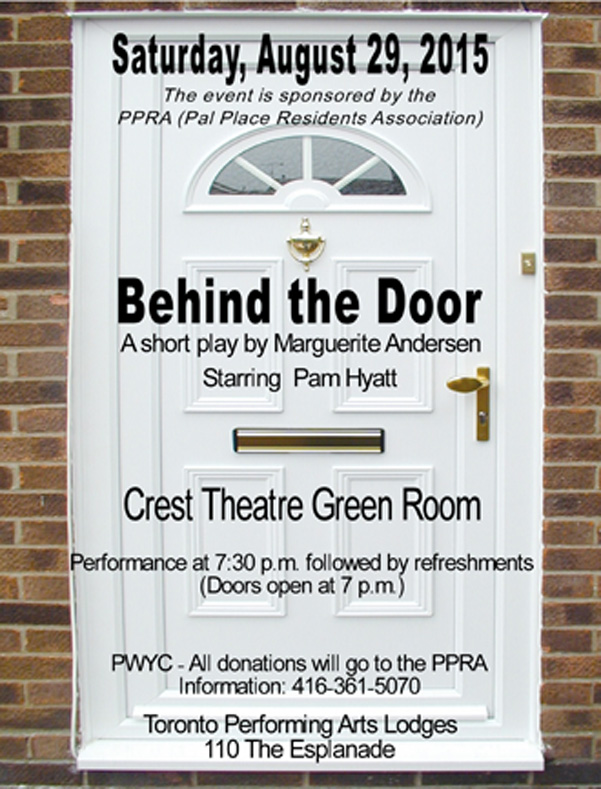