Pain, of course hurts, but it can often be a motivator

Posted by: Bulletin Editor January 4, 2014 Comments Off on Pain, of course hurts, but it can often be a motivator 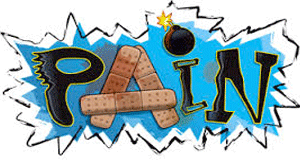 The summer of 2013 was the summer that never happened – for me at least. It started out normal enough, maybe a bit too much rain, but I was excited to finally have some warm weather in order to get some work done around the house. I had quite a to-do list… an even longer one for my business.

I feel your pain!

Actually, it’s mine, but it helps me understand yours

Then two weeks in, I found myself laid up with both feet injured. It was my own fault, I was invited to play in a Fathers vs. Sons baseball game, and not wanting to embarrass my son, I played hard. Too hard. I woke up the next day with a small pain, which I chose to ignore. I figured I could “tough it out,” and I continued on with my daily routines. Instead, I made it worse and the increasing pain motivated me to go see my doctor. I ended up having surgery. For seven weeks I became a prisoner in my home. I was unable to walk or drive, and I became dependent on my sons and fiancée for assistance.

During that time I experienced a lot of pain. I had to keep my feet elevated, braced and iced. Unfortunately, I was unable to fully avail myself of pain medication because I have a low tolerance for it (over-the-counter ones upset my stomach, and the prescription ones put me to sleep). So, for the most part, I had to tough that out too.

Needless to say, all my plans were tabled, and I ended up with a lot of time… time to think. And, perhaps naturally enough, I started to think about whether or not pain is a motivator.

Over the years, as I have written this column, I have often thought that I should address pain as a motivator. However, each time I thought about it, the first image that would pop into my head was Ben Hur chained to an oar in a Roman galley being whipped by the boatswain. Then I thought, “Sure, everybody knows that avoidance of pain is a motivator.” And, of course, most of us know that pain is a warning signal to stop doing what you’re doing; which, as I mentioned above, I chose to ignore.

Constant pain, however, is not very motivating. In fact, I found it to be quite the opposite. At first I thought, “Good, I can’t go anywhere or do anything, I’ll be able to catch up on all my writing projects.” But, the pain was simply too distracting. I couldn’t focus. Worse, the pain made me feel so bad that I couldn’t muster my usual creative energy. Instead, I found myself doing things that took my mind off the pain like watching television or reading. American humorist, Will Rogers, understood this when he said, “Pain is such an uncomfortable feeling that even a tiny amount of it is enough to ruin every enjoyment.”

My pain, or perhaps the weeks of cabin fever, did motivate me toward some long term goals. I decided that once I was better I would take a yoga class to strengthen my joints and tendons, so that this would not happen again. I also researched foods and supplements that would do the same.

The good news is that I didn’t suffer from great pain, and I knew all along that it was temporary. But, I started thinking about people who have extreme and chronic pain, and how seriously demotivating it can be. As Samuel Johnson, the 18th century English essayist, once observed, “Those who do not feel pain seldom think that it is felt .” Through my own pain, I was beginning to develop some empathy for those who live with it every day.

I recalled my friend Tom, who had his vertebra disks crushed in an auto accident. Several surgeries later, and some serious hardware inserted into his back, his doctor told him he would never be pain free, and would have to take pain medication for the rest of his life.

For seven years he was taking Oxycontin for pain, Klonopin for sleep, plus muscle relaxers. The drugs took their toll, and six years later he was having extreme mood swings. As an example, he told me how one day while driving he hit a bird and killed it. He started sobbing uncontrollably, then just a few minutes later a driver cut him off in traffic, and he switched to a screaming rage. On top of that his sex drive had completely dried up.

The mood swings and lack of sex drive, motivated him to see his doctor. His doctor explained that the pain medication was depleting his testosterone, and jokingly commented, “My nurse probably has a higher testosterone level than you do right now.” Tom’s wife joined in by adding, “That and you’re probably the only man in the world who understands PMS!”

That was it, Tom wanted to get off of the pain medication. His doctor started him on testosterone injections, and switched his pain medication to Methadone, which is often prescribed to heroin addicts to help relieve withdrawal symptoms. Tom described to me how he would shave a little bit off of each pill – until over time – he was taking a mere fragment. A year later, he stopped taking it altogether; he was finally pain free, medication free, and sexually active once again.

As I review my summer of pain, in the beginning it took a while, but eventually it motivated me to seek medical attention. The longer term pain I experienced was demotivating and kept me from achieving even my most sedentary goals. On the other hand, it did encourage me to make some lifestyle changes (we’ll see how long those last). And, it gave me empathy for people who suffer chronic pain.

I’d like to further explore the motivational factors of pain, so next time, I’ll write about whether or not psychic pain (emotional pain) drives us to make changes in our lives.

Robert Evans Wilson, Jr. is an author, humorist and innovation consultant. He works with companies that want to be more competitive and with people who want to think like innovators. Robert is also the author of the humorous children’s book: The Annoying Ghost Kid. For more information on Robert, please visit http://www.jumpstartyourmeeting.com