Posted by: Bulletin News May 29, 2011 Comments Off on Off-leash ok for Clarence Park

In Clarence Park—half a kilometer and directly east of Victoria Park—the entire south portion will be transformed into a dog run in the hopes it will entice area pet owners to come to the pet friendly area.

“We have a significant challenge in this neighbourhood…for some reason dogs are abundantly present in the ward,” Adam Vaughan pointed out to approximately 40 people at a community meeting May 4 at Metro Hall. “If one of the parks is totally off limits it means the other park has to shoulder some of the responsibility.

“Although this is generous (in size) if we don’t do this you will get dogs outside the dog run area and you will loose the entire park.” 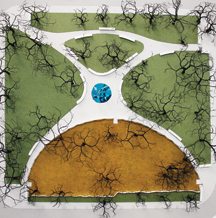 One resident asked if the dog run could be moved to the west portion of the park along Spadina—leaving the south, a more quiet section, for the enjoyment of residents—but it was pointed out by certified arborist Michael Ormston-Holloway that the unique types of trees, which is an important feature of the park, would not survive if dogs were set free in that area.

A child friendly water feature in the middle of the park was also presented to area residents but this was met with opposition from a number of people with one stating it would be used as a “dog wash station,” and another resident adding that the shade from the trees and short summer season would be an additional deterrent for youngsters.

Neighbours warmed up to the suggestion of resurrecting a water fountain in the middle of the park to be used as a focal point of the area. The fountain would not become operational due to the cost but area residents wanted to incorporate the structure for its nostalgic significance.

Vaughan told area residents he will be meeting with the planners to discuss their suggestions and another public meeting would be arranged prior to the upgrade of the park.

For information about Clarence Park visit at www.wellingtonplace.org.