Greater Toronto Area Realtors reported 6,391 residential sales through the Toronto MLS system in November, representing a 13.9 per cent increase over the sales result for November 2012. Over the same period, new listings on TorontoMLS were down by 4.4 per cent and month-end active listings were down by 12.1 per cent.

“Growth in sales was strong for most home types in the Greater Toronto Area. Sales growth was led by the single-detached market segment followed by condominium apartments. Together, singles and condos accounted for almost three-quarters of total GTA transactions,” said Toronto Real Estate Board President Dianne Usher.

“With National Housing Day having just passed, housing affordability is top of mind in the GTA and indeed nationally. Despite strong price growth and an uptick in borrowing costs this year, monthly mortgage payments on the average priced home remain affordable for a household earning the average GTA income,” continued Ms. Usher. 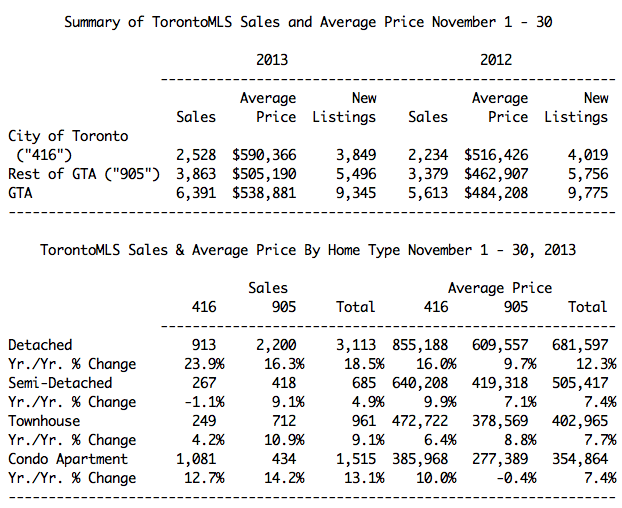 “Whether we consider the average TorontoMLS selling price or the MLS(R) HPI Composite Benchmark, annual home price growth remained well-above the rate of inflation in November. This makes sense given the fact that competition between buyers increased last month. Transactions were up strongly year-over-year while the number of homes available for sale was down,” said Jason Mercer, TREB’s Senior Manager of Market Analysis.

Housing starts in the Ontario region were trending at 61,870 units in November, compared to 63,767 in October, according to Canada Mortgage and Housing Corporation (CMHC). The trend is a six month moving average of the monthly seasonally adjusted annual rates (SAAR)(1) of housing starts.

“The trend in Ontario residential construction activity eased in the latest month with most dwelling types posting slower construction activity. Nevertheless, the starts trend remains higher than it was for most of the year. Demand for resale homes, a backlog of apartment units awaiting construction combined with a gradual improvement in the job market remain supportive of housing demand,” said Ted Tsiakopoulos, CMHC’s Ontario Regional Economist.

CMHC uses the trend measure as a complement to the monthly SAAR of housing starts to account for considerable swings in monthly estimates and obtain a more complete picture of the state of the housing market. In some situations, analysing only SAAR data can be misleading in some markets, as they are largely driven by the multiples segment of the markets which can be quite variable from one month to the next.

The SAAR of total housing starts was 56,932 units in November, down from 68,233 units in October. Multi family home construction which includes semi detached, row and apartment dwellings declined most while single detached starts also slowed more noticeably for the first time in three months. For the year ending November, Ontario urban starts are down 21 per cent from this time last year.

Canada’s largest housing market – accounting for 19 per cent of national sales – continues to defy concerns of a correction, according to a new report from BMO Economics on Canada’s major housing markets.

“Across Greater Toronto, sales are up 20 per cent year over year in the three months to October, and stand 9 per cent above past decade norms,” said Sal Guatieri, Senior Economist, BMO Capital Markets. “While preliminary figures show sales slowed in November, markets are generally balanced; but sellers rule and bidding wars prevail in certain pockets. Benchmark prices have picked up to an above 4 per cent pace, and, at over six-times median family income, remain lofty.”

The report shows that after plunging last year, new condo sales have firmed but remain well below the past decade norm. “Condos are an affordable alternative to the detached market for the more than 80,000 international migrants moving to the region each year and the growing number of young people leaving their parents’ basement,” stated Mr. Guatieri. “While low rental vacancy rates have kept resale condo prices near record highs and rents on an upward course, prices of new condos have weakened modestly in the face of a record number of units under construction – close to 60,000.”

According to the report, investors who have purchased roughly half of new condos in recent years could get antsy if rents flatten out or prices soften further. However, most of the new units coming on stream should be absorbed by robust population growth.

Mr. Guatieri concluded that the looming supply of condos, high valuations of detached homes, elevated levels of household debt and expected higher interest rates should slow overall price increases in 2014, even as new immigrants and echo boomers provide support. “We expect Toronto house prices to stabilize in 2014, and to remain at risk of declining moderately when interest rates normalize.”

Andrew Auerbach, Senior Vice President, Greater Toronto Area, BMO Bank of Montreal, recommended that those looking to buy in the pricey GTA market should take measures to ensure affordability can be maintained over the long term.

“In light of the potential for higher interest rates in the near future, it’s crucial that those looking to buy a home – particularly first time buyers – stress-test their mortgage against a higher rate to ensure they can afford what they sign up for should conditions change,” said Mr. Auerbach.

The full report, featuring the complete and sourced version of the scorecard can be downloaded at bmocm.com/economics.