Posted by: Bulletin Editor October 5, 2013 Comments Off on Nora the piano-playing kitty 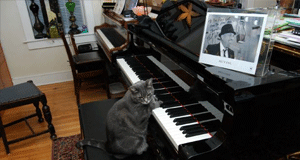 Nora at the keyboard with her inspiration, Billy Joel 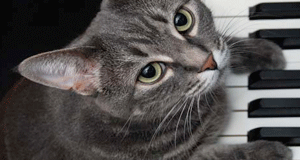 When Betsy Alexander and Burnell Yow of Philadelphia, PA, visited an animal shelter in Cherry Hill, NJ, they never imagined they would adopt a feline prodigy.

Nora, a grey Tabby named after the surrealist painter Leonora Carrington, appeared to be your average mischievous young kitten. But this seemingly ordinary shelter cat is received an extraordinary honour in 2010 when she won the annual ASPCA Humane Awards in New York City.
Originally deemed “bossy” by shelter staff, Nora wasn’t the most popular feline among her 4-legged clan, but Betsy and Burnell saw something special in the demonstrative kitty and welcomed her into their furry family. Nora immediately established herself as the alpha cat of the family’s four other felines, but it wasn’t until she was a year old that her secret gift suddenly emerged.

One afternoon, Betsy, who teaches music lessons, was startled to discover Nora delicately tickling the ivories of her Yamaha piano. Playing the piano soon became the cat’s favorite pastime. Her sensitive pawing, which several newspapers have described as “a cross between free jazz and Philip Glass,” inspired a Lithuanian composer to arrange a symphony in her honour.

Though her talents are unrivalled, Nora has been named the ASPCA Cat of the Year as much for her musical abilities as for her pluck and drive to prove that shelter pets—far from being castoffs—often make the best animal companions.

2013-10-05
Bulletin Editor
Previous: Diane Francis would turn Canada over to the U.S. police state
Next: Harper’s China trade deal could wreck our democracy