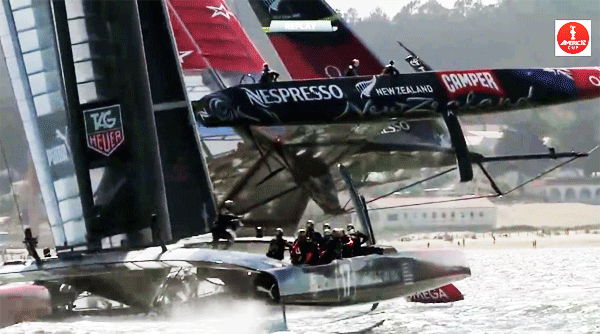 For the first time in its 162-year history, the America’s Cup yacht race was watched live by thousands of fans onshore and millions of television viewers worldwide. Considered sailing’s equivalent to Formula 1 car racing, the event was open to more fans than ever because it was held in San Francisco Bay. With the scenic Golden Gate Bridge in the background, the most witnessed America’s Cup to date provided an international sports spectacle that did not disappoint.

“The greatest comeback in the history of sports,” is how Gavin Newsom, Lieutenant Governor of California described it. Always a 1-on-1 match race pitting two of the world’s fastest sail boats head-to-head, one from each of two nations, this years match featured a Goliath, the billionaire Larry Ellison sponsored Oracle Team USA against a David, the mostly government sponsored Emirates Team New Zealand.

Team New Zealand had the U.S. Team down and all but out. At one point in the best of 17 race series, they led by eight races to one. Facing match point, with New Zealand needing only one more win to clinch the Cup, Team USA mounted an astonishing comeback, winning eight races in a row and the 34th America’s Cup.

Dramatic, yes, but the stars of this year’s running of the oldest trophy in international sports were not the boat’s owners, or even the race crews, with 11 souls per boat. The boats themselves are the draw, because the world’s fastest sailboats today are nothing like those of yesterday.

Each team sailed an AC 72. It’s a twin-hulled catamaran that races at highway speeds, regularly exceeding 80 kph (50 mph). They are 13 stories tall and a quarter football field long. Yet they weigh only six metric tons. That is only one-eighth the weight of a conventional, single-hulled sailboat of comparable size. Made of ultra-light carbon fibre composites, they weigh only half of what catamarans of equal length made of conventional materials weigh. AC 72s are only half the weight of a Volvo Ocean racer, because those 70-foot class carbon fibre boats are single-hulled and necessarily heavier.

An AC 72’s power-to-weight ratio is so high that at full speed it lifts itself completely out of the water and literally flies over the surface. It supports its own weight on underwater wings known as hydrofoils. It has two; one for each hull. Each is merely the size of a surfboard. With only that racing through the water as opposed to both hulls, resistance is so reduced that by hydro foiling, maximum speed can exceed three times the speed of the wind.

Power is from an unconventional sail wing. Rather than a flexible, flapping sail, this is a fixed, semi-rigid wing the size of a jumbo-jet wing. It provides so much power that Team New Zealand nearly capsized in race eight, heeling over to within a fraction of a degree of the boat’s tipping point of 45 degrees. It is so much power that a capsize by Team Artemis of Sweden in America’s Cup preliminary races in May of this year cost the life of one crew member, in a real-life (and death) version of the scene from the 1999 version of the movie The Thomas Crown Affair.

This international competition can be expensive in blood, as well as in treasure. An estimated $100 million was spent by Oracle Team USA. Does the reward outweigh the risk? Look at the winglets on almost every modern airliner. They reduce drag, saving money for each passenger and passenger carrier. Note, they are a direct result of the first-ever winglets, placed on the keel of the America’s Cup winning yacht from 1983, Australia II.

Before Australia, the United States was the only nation to have won the America’s Cup, which is named not after the nation but for the schooner that first won the Cup in 1851. America raced around the Isle of White off England, and rings around the best the British could muster. Only two other nations since Australia have won the Cup, New Zealand and Switzerland. Others have challenged, including Canada twice, in 1876 and 1881, losing both matches two races to none.

So prized is the trophy, the oldest in international sport, that Dennis Connor, skipper of the U.S. boat that lost the cup to Australia and later won it back, repeated in his book “Comeback” the phrase that hitherto had been the final word regarding it: “Whoever loses the America’s Cup shall replace it with his head.”

Some 400 000 YouTube viewers have watched the final race of this year’s Cup online, along with millions of television viewers in the U.S. and New Zealand who watched live, and maybe as many again around the world, including many here in Canada. Once the preserve of millionaire yacht owners and their friends, future America’s Cup races have a good chance of being viewed by many, many more millions to come.