Meet the man whom every Torontonian should know about

Posted by: Bulletin Editor August 28, 2013 Comments Off on Meet the man whom every Torontonian should know about 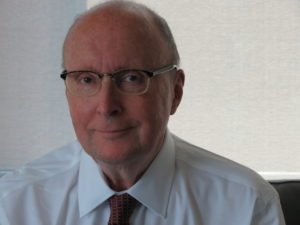 If there is one thing Torontonians should be thankful for that most don’t even know about, it’s the fact that a man by the name of Rollo Myers didn’t stay in Australia.
Instead, Myers moved to Canada and spent the last 30 years as a community builder with heritage as his key tool. From inventing a machine for turning maps into three-dimensions to co-founding numerous Toronto heritage organizations, he’s been a great connector of people and a persistent advocate for our city’s heritage. As prominent Toronto lawyer George Rust-D’Eye has said, “Rollo Myers is doing a hell of a lot for the future of Toronto.” Heritage preservationist Cathy Nasmith calls him one of Toronto’s most inveterate and valuable heritage figures.
And why should your average Torontonian know about him? His persistence over 15 years finally led people to pay attention to the site of Ontario’s first purpose-built parliament buildings. At the southeast corner of Berkeley and Front Streets, Torontonians may have noticed the new Ontario Heritage Trust interpretive centre commemorating the site as well as the War of 1812 (the buildings were burned by invading troops in 1813, resulting in a retaliatory raid on Washington the following year that saw the burning of the White House).
A lot of behind-the-scenes work went on to bring the centre and the land’s future plans to fruition, aided in recent years in particular by the vision of architect Michael Kirkland.
Without Myers, the interpretive centre likely would not have seen the light of day nor would that area have a long-term plan for its use. He helped bring the land between Parliament and Berkeley Streets into public hands and, using his mapping know-how, created 200 years worth of overlays to position the site on Toronto’s modern street grid. Contrary to others’ opinions, Myers argued that the building’s archaeological remains may exist in spite of intense development.
His efforts helped get the site designated under the Ontario Heritage Act and helped secure funding for a test dig that did indeed find the building’s remains. The discovery took Toronto by surprise; without Myers, the site may have continued to go unnoticed and uncelebrated.
Myers was also one of the people who founded Citizens for the Old Town, which rebranded the original ten blocks of the Town of York and environs.  Helping keep this stretch of history intact means close to a million Torontonians and visitors can enjoy Toronto’s earliest neighbourhood, from world-renowned St. Lawrence Market to St. James Cathedral to Corktown and the Distillery District.
Cabbagetown was another area Myers left his mark on: He renovated four previously run-down Cabbagetown homes and helped get the area designated as a series of Heritage Conservation Districts. His effort there means Torontonians and visitors get to enjoy one of the largest areas of continuous preserved Victorian housing in North America.
And upon hearing reports that the area was to be sold for a harness-racing facility, Myers joined others in the West Don Lands Committee, helping to host workshops and create plans showing the West Don Lands could be a thriving mixed-use, medium-density residential community while capitalizing on the area’s remaining heritage and environmental attributes.
At Fort York, using those crucial mapping skills, Myers produced 3-D models showing how proposed development would block key sightlines, which led to a major planning review and an alternate layout of roads and development. This review in turn had triggered the founding of the Friends of Fort York, one of the City’s most dynamic and productive heritage volunteer groups. Fort York wouldn’t be the same for Torontonians if it weren’t for Myers’ work there.
His Council appointment to the Toronto Historical Board saw him reviewing development proposals for heritage properties and later serving on community working groups for Old Town development projects with heritage aspects such as North St. Lawrence Market, MOZO, King George Square, King’s Court, Spire, The Berczy and others. Myers’ work has helped ensure that Toronto can still move into the future without forgetting its past.
Torontonians can thank him for some of our public art and green space, too: Myers is one of the players doggedly leading the charge for public parks funding based on a long-forgotten Walks and Gardens Trust. He even has a say in what public art Torontonians will see at the soon-to-be revitalized Union Station: he’s on the jury that recently selected the winning Walks and Gardens commemorative public art entry for this major transit hub.
He served six years as the Heritage Canada Foundation’s Governor for Ontario, and his current role he’s held for the past nine years is Manager of the Architectural Conservancy of Ontario and its 24 branches.
For his body of work, Myers will receive the Special Achievement Award at the Heritage Toronto Awards on October 15. To meet the man and legend himself, visit www.heritagetoronto.org or call the Royal Conservatory box office at (416) 408-0208 to purchase tickets.

Heritage Toronto is a charitable arms-length agency of the City of Toronto established in 1949 to promote a greater appreciation for the city’s rich architectural, cultural, archaeological and natural heritage. Through partnerships with local community groups and volunteers, Heritage Toronto provides city-wide programs and services.