Every year, the municipality of Sainte-Perpétue, in Quebec, holds an event known as “festival du cochon” (pig festival).

During this event, domestic pigs, as well as wild boars, are forced into an arena where participants chase them, catch them, lift and drop them in a barrel, put plastic rings around their necks, and force them to run through cylinders.

The potential for injuries is high during such events, particularly when participants launch themselves on the animals to force them to stop running and grab them, or when the animals frantically run in a futile attempt to escape their pursuers. Such handling can also lead to various internal injuries, which would only be noticed later or upon the death of the animals. 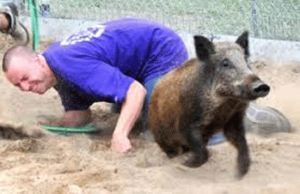 Additionally, transporting pigs, throwing them into a strange environment, chasing them, grabbing them, lifting them and subjected them to the noises of a crowd cheering ineluctably cause stress and fear to these highly intelligent and sensitive animals. The combination of fear and physical exhaustion can cause extreme stress and fatigue for the animals, who, in severe cases, could collapse and even die. This risk is compounded by the fact that these events take place during the heat of the summer. High temperatures and humidity can cause further stress to pigs who, unlike humans, do not have sweat glands and are therefore more at risk of heat stress and heat stroke.

It is also likely that pigs (and other farmed animals) used in these types of events are prevented from eating and even drinking for some length of time before the events in order to avoid or limit the release of vomit, urine and feces — “by-products” of stress and fear, which could deter potential participants from registering.

By imposing stress and fear on animals for the sake of entertainment, organizers teach participants and attendees, adults and young alike, that animals, as intelligent and sensitive as they are, can be used for humans’ own purposes, no matter the consequences for these sentient beings — a disturbing message which should have no place in the twenty-first century.