Look for more growth in price, volume of real estate

Posted by: Bulletin Editor January 2, 2014 Comments Off on Look for more growth in price, volume of real estate

I haven’t commented recently on the state of Toronto’s real estate economy for several months as I wanted to have some time pass to see whether my predictions continued to be correct or if I was advising readers in the wrong direction.  So far, since the early 2000’s, I have been bang on (refer to past newsletters on my blog).  Without going into the vast number of comments and predictions I have made over the last 15 years, I will reflect on some of the more important comments I’ve recently made and predict some real estate events going forward.

We were dragged into this recession by  actions of the U.S. and the megabanks

Since 2009, we have seen a steady growth in price and volume of all types of real estate.  This occurred largely due to a few unique factors in Canada.  Firstly, Canada wasn’t really in a position to suffer a recession.  Our banks were in good shape, growth wasn’t overly robust, interest rates and inflation were low, consumers weren’t strapped, and our real estate economy was overall in pretty good shape.  We were dragged into this recession by the actions of the U.S. and the megabanks/financial institutions of the world.  Our behaviour did not justify a punishing recession and as a result, our recession was milder than most.  Don’t get me wrong, Canadians have suffered through the last 5 years of the post-recession period due to a lackluster recovery.  Our pain was nothing compared to the suffering of virtually every other developed country in the world. 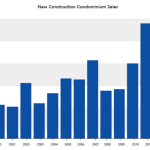 The reason why we are seeing such a weak recovery is very simple.  Our government has too much debt, Canadian corporations are hoarding cash and holding off hiring and all world governments are printing money, keeping inflation very low.  Hard hit economies in Europe are still mired in recession and likely won’t turn to growth for a couple for years.  All countries have too much debt and can’t stimulate their economies.

Our slow growth of approximately 2% is going to be our growth rate for a few more years.  We will see 3%+ growth once a few things happen.  This will occur when our government starts spending money around early 2015, along with the U.S. growth rate rising to over 3%.  We also need developed Europe to exit from its recession in 2015.  I expect robust growth during 2015-2020.  Consumer spending is going to start to move higher again in Canada by late 2014.

Unfortunately for those looking to buy real estate, prices are going to take off again in the near future despite what a few economists and journalists are predicting.  Some of these guys are of the belief that prices may fall, maybe collapse.  This is just not going to occur.

Real estate prices don’t fall meaningfully in periods of economic growth.  Canadian economic growth will get significantly stronger with time as the developed world fully exits the last recession.  While the great Toronto development boom is over, steady development growth will continue.  We will no longer see the hundreds of cranes dotting the sky, just dozens.  For real estate price growth stability, this is a good thing.   Construction layoffs in excess of 75,000 jobs will start to occur over the next 6 months to a year due to new condo sales slumping from 20,000+ per year to approximately 10,000 per year post 2012.

2017 will see a shortage of new completed condominium homes

There are less than half as many new projects per year since 2012 compared to prior to 2012.  This ultimately means less construction jobs and soon, less finished product.  As a result, 2017 will see a shortage of new completed condominium homes.  We are now starting to see the return of the investor, chomping at the bit for opportunities to buy new investment product.  There will not be enough product to satisfy this demand.

Low-rise new sales are anemic due to a lack of new available lots.  This single-family low-rise supply issue will continue to drive home prices to higher and higher prices.  Essentially, unless you are wealthy ($200,000+ income per year) you will not be able to buy a low-rise single family home in the city by 2017.  A house within minutes of the core area of the city will be $1,000,000+.

With rising construction costs, rising development levies (recently doubling adding $10,000 in costs to every new condo), rising land prices (as it disappears), and soon rising demand, and a lower supply, prices are going to start climbing again.  I predict that typical $600PSF condo will rise to $800PSF within the decade.  A 500SF one bedroom suite in the central core in a new building will sell for $400,000 by 2020.  Currently, the cost of developing an average condo building in Toronto is $500PSF with a profit margin on costs of approximately 20%.  Costs will rise within 3 years by an additional $70PSF bringing the actual cost to build close to $600PSF.

We will see Toronto condo prices start to rise meaningfully by the middle of 2016.  Until then, ample supply will keep serious price increases in check.  Additionally, condo rents will rise dramatically beyond 2016.  Currently, a 500SF suite rents for $1500 per month.  By 2020, that same suite will rent for $2000 per month.  I don’t expect rental prices to continue their torrid rise until mid-2016.

Much has been said about Canadians borrowing too much money.  This is bunk.  The much talked about “trouble” indicator is when debt exceeds 1.6X income.  If a potential buyer earns $125,000 per year, they can qualify easily to borrow $500,000 in mortgage financing with $200,000 in equity.  They could buy a home for $500,000 and borrow $350,000.  They could also buy a $200,000 investment property and borrow $150,000.  The house will cost $2200 per month and the investment property’s rent will more than carry the costs to own it.   This buyer then would have $500,000 in debt.  Let’s assume they have no credit card, educational, or car debt.  Their debt to income level is $500,000/$125,000, or 4.  According to most bean counters at the Ministry of Finance, this buyer has a problem.  I refute that.   If this buyer wanted to rent a similar home, it would be at least $2200 per month.  This buyer is being smart and setting themself up for financial security in the future.  Additionally, they are retiring close to $20,000 in debt every year.  This is a smart move.  Not according to many illustrious economists and our Finance Minister.  I guess they would rather we put our money in a sock and hope for the best as they conspire to strip away any pretense of old age and retirement benefits.  What I see is Canadians starting to wake up and realize they are on their own.  Governments are going to tax more and offer less.

A recession is coming eventually.  It is not on the visible horizon.  For Canada to fall into negative growth we will need to see Europe exit their recession and expand into robust growth for several years.  We will need the U.S. to do the same.  This is perhaps 8-12 years away.  We will need both 5 year interest rates and inflation to rise above 7% and 4% respectively.  This is a long way off.  Until then, like it or not, we will see rising real estate prices and low interest rates.