Local music producer revels in the overthrow of ‘music sharks’

Posted by: Bulletin Editor October 1, 2014 Comments Off on Local music producer revels in the overthrow of ‘music sharks’

Today, music producer, sound engineer, musician, lyric writer and composer Chris Birkett is a Bathurst Quay resident with a studio on Sherbourne St. near King St. But before he became a Downtown resident, he experienced both rags and riches. 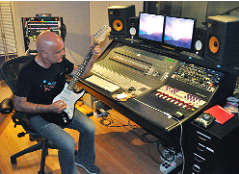 Birkett settled down one evening in his studio to talk to The Bulletin about his rise-from-the-bottom story. “I couldn’t buy a guitar, but I had this burning desire to play,” said Birkett who grew up in Farnborough, a poor district just outside London.

When he was 12, Birkett began saving every penny he could to finally buy an electric guitar. HE taught himself to play and attended as many auditions as he could find, eventually establishing himself as a local name.

A crossroads came in his life when he was 21, pumping gas around 2 a.m. when a stranger entered the station, asked if he was Chris Birkett and asked him to join his band. Five hours later, Birkett was off to Germany for an 18-month tour with the rhythm and blues band Montana Red Dog, passing through Greece, Turkey, Italy and England. Later, Birkett spent three months in Switzerland playing in a ski hotel.

Back in England, at 23, he joined the band Love Affair (known for the hit Everlasting Love). From there he signed a deal with Tony Visconti’s Good Earth Records. Visconti, who also produced David Bowie, became Birkett’s production mentor.

This led to Birkett’s career producing, engineering and mixing records from his own studio in London. After producing Sinead O’Connor’s hit Nothing Compares 2 U in 1991, Birkett’s studio was listed as #2 in the world by Billboard Magazine. Riding high, he released his first solo album, Men from the Sky, in 1993. A track from this record was included on the Polydor compilation album One Voice One Love, alongside Peter Gabriel, Queen and U2.

But Birkett knew something wasn’t right when he realized his two little kids weren’t seeing much of him. “I came home and my kids were kinda forgetting me. They were calling my engineer at my studio ‘dad.’ So I thought I’m missing something really important.”

With that, and the help of about $1 million from royalty cheques, he bought a 32-room chateau in southern France in 1993, built a studio in it, and moved his family there. “People came from all over the world to record with me.”

After that was a 6-year stint in Paris where he set up his recording operations and made his second album called Freedom. But the French media wouldn’t play his songs because he sang in English. He said to himself “I think I’m in the wrong country.”

His marriage was also breaking up. So with the setbacks he moved to Toronto where he lives with his new wife, Joan Prowse, in Arcadia, an artists’ housing co-op at Bathurst and Queens Quay.

Birkett is eager to get his citizenship so he can help other younger artists develop their own careers. “My whole thing is sharing my knowledge because I’ve been making records for 40 years.”

He sees better days ahead for true musicians now that music can be easily downloaded and the big money for “music sharks” is petering away. Money should not be the motive to make music, Birkett feels.

“We’re not going through a filter of financial corporate interest anymore. It’s dying away. You’re (now) getting this undercurrent of huge artistic creativity. It’s coming out gradually.”

“I think that’s really positive for the future. It means we’re going to go back to music as a sacred gift.  The job of the true artist is to help the evolution of the planet,” says Birkett.

2014-10-01
Bulletin Editor
Previous: Bombshell election will blast a dud as Ford reign ends
Next: The fluoride fiasco: how your city endangers your life & health