Posted by: Bulletin Editor July 13, 2017 Comments Off on Lessons from Jesus feeding 5,000 people

“The people were surprised when they saw two fish and five loaves feed all of them,” says Alejandro, 7.

Surprised is a gross understatement. They were impressed. They wanted to seize Jesus and make him king. Jesus took a boy’s lunch of five loaves and two fish and fed 5,000 men (John 6:10). If you add the women and children, this crowd could easily have numbered 10,000 to 15,000.

Jesus was not impressed with the crowd’s enthusiasm to make him king. He sent his 12 disciples to the other side of the Sea of Galilee in a boat while he departed to a mountain by himself. 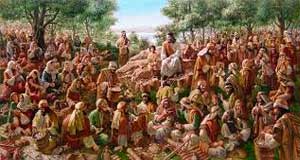 him in Jerusalem. The crown would come later, but not from an enthusiastic mob that probably saw in Jesus their liberator from Roman rule. After breaking the bonds of death on Easter Sunday and ascending to heaven, God the Father crowned Jesus King of Kings and Lord of Lords.

Celeste, if the same multiplier of Jesus feeding 5,000 men with a boy’s lunch applied to sharing your pencil and erasers, I suppose sharing one pencil and eraser could supply every kid in your school for the entire year.

“Have faith and trust in the Lord,” says Andrew, 8. “You have to trust in what God is going to do for you.”

When Jesus saw the crowd coming toward him, he asked his disciple Phillip, “Where shall we buy bread that these may eat?” The same Bible text in John 6 tells us that Jesus already knew what he would do, but he tested Phillip with this question.

There is a big difference between testing and temptation. God will test his people so that they may grow in their ability to trust him. God always wants us to pass any test he sends our way.

When Satan tempts, he always wants to draw us away from trusting God. To be sure, the evil one wants us to fail. Also, he will try to make us feel guilty about our sin. Only the grace of God can break this downward spiral.

How refreshing it would have been for Jesus to hear from Phillip: “Lord, you turned the water into wine at the marriage feast. Why don’t you take that boy’s lunch and feed everyone?”

Instead Phillip replied, “There is a lad here who has five barley loaves and two small fish, but what are they among so many?” (John 6:9).

When we fail to look up, we are bound by the limitations of our own resources. The feeding of the 5,000 begins with this statement, “Then Jesus lifted up his eyes,” (John 6:5). The sentence continues, “and seeing a great multitude coming toward him…”.

Think about this: We must encounter each problem by lifting up our eyes to the Lord. The more we fix our gaze on the Lord Jesus, the smaller our problems seem because nothing is impossible for him.

Memorize this truth: “But without faith it is impossible to please him, for he who comes to God must believe that he is, and that he is a rewarder of those who diligently seek him” (Hebrews 11:6).

Ask this question: Where do you look when you encounter problems?