Posted by: Bulletin Editor April 3, 2014 Comments Off on Larbre switches to sports-prototypes with ELMS and WEC LMP2

Larbre Competition will make its sports-prototype debut in the European Le Mans Series this season after confirming plans to field a single Morgan-Judd LMP2 in the championship’s premier category. Selected FIA World Endurance Championship outings have now also been finalised.

The French outfit is best known for its GT racing exploits having secured no less than nine titles across several international series. But after FIA WEC organisers prevented the team from returning to the GTE Am class with an all-new Corvette C7.R, other opportunities were sought.

This has led to Larbre Competition embarking on an entirely new programme alongside OAK Racing’s manufacturer department, Onroak Automotive, with whom they will run a sports-prototype for the first time in their history. 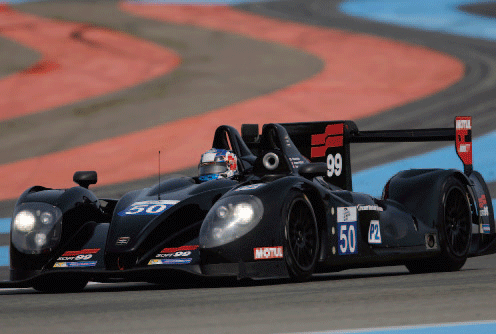 Japanese female driver Keiko Ihara joins the team for several ELMS races and the post-Le Mans WEC rounds having previously campaigned LMP2 machinery in the world championship and at La Sarthe. She will share the #50 car in the ELMS with OAK Racing President Jacques Nicolet, who already boasts experience of racing a Morgan on the international stage.

Despite countless victories and much success secured across all of the ACO’s championships down the years – including a two-decade presence at Le Mans – Larbre was only granted a place on the LMP2 reserve list for this year’s 24-hour classic. Currently first reserve, the team is still hopeful of contesting the world’s greatest endurance race on June 14/15.

But of more pressing concern was this week’s official ELMS test (April 1/2) held at Paul Ricard in southern France where Larbre ran its Morgan-Judd LMP2 for the first time. With OAK Racing factory driver Olivier Pla and reigning ELMS champion Pierre Ragues helping out on days one and two respectively, it was no surprise to see the team immediately on the pace, finishing third fastest in both sessions.

Jack Leconte, Team Manager: “The official ELMS test marked the beginning of a new chapter for Larbre Competition as we were running an LMP2 car for the very first time in our history.

“After the WEC officials refused to homologate our Corvette C7.R we sensibly elected to enter the ELMS. The championship has really gained momentum with the entry list increasing to over 40 cars.

“Another major development is the arrival of Keiko Ihara who has a busy 2014 racing programme ahead of her. After Vanina Ickx in 2003 and Lilian Bryner, who raced with us during the 24 Hours of Spa in 2005, Keiko will be the third female driver to join Larbre Competition.

“Upon deciding to race sports-prototypes it was only natural that I contacted Jacques Nicolet, with whom I enjoy a great and close relationship through our common activities around Circuit Val de Vienne. We asked Onroak Automotive to help us kick-start the project and are also relying on their skills, expertise and motivation to nurture it.

“Unfortunately, we’ve ended up on the Le Mans 24 Hours reserve list. I can’t find the words to comment on this decision as it ruthlessly overlooks our loyalty and the successful history we’ve enjoyed in all of the ACO-organised championships. Whether it’s the LMES (former name of the ELMS), ILMC, Asian Le Mans Series, American Le Mans Series or WEC, we have raced and secured wins and championships in all of them. What’s more, we have been at Le Mans for the past 20 years! No other team can boast such achievements.

“After the decision was made public we were set to pull the plug on our endurance programme, but Jacques – whom we are delighted to see race our #50 car – breathed new life into the project, which enabled us to bounce back. We are now determined to extract the full potential of our Morgan LMP2 and the official ELMS test session could not have come at a better time.

“For our first season in prototype racing our main goal will be to gain as much mileage as possible in an attempt to improve our knowledge of the car and its reliability. Then, we will be ready for a full WEC return in 2015.”

Keiko Ihara: “I am delighted to be joining Larbre Competition for the 2014 season. They are a great team who have won Le Mans many times and also sealed the GTE Am WEC title. I am very happy to be racing a Morgan LMP2 chassis, which is a truly potent endurance racing machine.

“I really hope we get the green light for the Le Mans 24 Hours, where I’d be targeting a very strong result. I have been racing in the WEC for the past two seasons and came very close to a podium finish last year. Hopefully I can achieve this in 2014, especially at Fuji.”

The opening round of the 2014 European Le Mans Series takes place at Silverstone on April 18/19.