Probably no question in all of theology and philosophy has spawned more debate.fully God, fully man

An accurate answer can be given in one word: MYSTERY.fully God, fully man

“Great is the mystery of godliness,” wrote the Apostle Paul to Timothy (I Timothy 3:16).

Attempting to explain this mystery has gotten many of my friends into trouble. But they aren’t the first, and they won’t be the last. 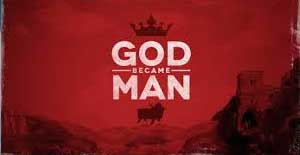 “Jesus grew up as a man, and then God turned him into a God,” says Brian, 8, little realizing he has an ancient idea. Brian, this error started in Rome around A.D. 190. The first to be credited with this deviation was Theodotus the Tanner, who would have fared better if he had stuck to making leather sandals.

Theodotus said Jesus was a “mere man” whom God “adopted” when the Holy Spirit came upon him at his baptism. Today, there’s a popular variation of this idea: Jesus was a mere man who attained a higher form of God consciousness. We, too, can achieve the same oneness with God. Right?

Listen to the angel who appeared to shepherds in the field at the time of Jesus’ birth, “For there is born to you this day in the city of David a Savior, who is Christ the Lord” (Luke 2:11). Did the angel mistake a “mere man” for “Christ the Lord?”

“Jesus is not 100 percent man because then He wouldn’t be perfect,” says Caroline, 10, who is probably reacting to all the imperfections she has observed in people. And so did the Gnostics of the first century.

But the Apostle John said, “Gno!” to the Gnostics.

John intertwined earthly matter with the eternal to say Jesus is man and God. Because of who Jesus is, John wrote that the way to fellowship with the Father has been opened.

Take a tip from Donald, 12: “Anything is possible for God.”

Think about this: God and man united in one person. Two natures, one person. This is the essence of a church council that met in Chalcedon in A.D. 451. Even though the natures are inseparably united in the person of Jesus Christ, they remain distinct, whole and unchanged, without mixture or confusion.

Ask this question: Have you made your peace with the one who is fully God and fully man?

Previous: Gadget Zone: 2017 Focus is a peppy pleasure
Next: BIG on Bloor Festival of Arts & Culture