‘Island airport a liability not a benefit’

Posted by: Bulletin Editor November 9, 2012 Comments Off on ‘Island airport a liability not a benefit’

Political and business bigwigs provide the bulk of passengers for the airport that got its start from ex-Liberal MP Dennis Mills, though the Tories quickly jumped on board when Harper gained power—CommunityAIR says there are effectively no benefits to Toronto from the Island airport 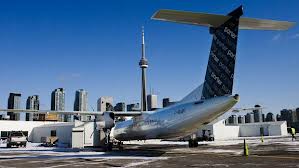 The Toronto Port Authority has released a study of what it considers to be economic benefits it alleges flow from its drastic expansion of the Island Airport.

The community group CommunityAIR has these initial reactions:

The report claims the airport has generated $200 million in direct gross domestic product, $900 million in economic output and 1700 jobs. This isn’t new business. Wouldn’t this economic activity have occurred at Pearson if Porter and Air Canada Jazz flights were located there? This study does not ask – or answer   that question.

Is there a net benefit from the Island Airport to the tourism industry? Are tourists coming to Toronto replacing those Torontonians who now find it more convenient to fly – and spend – elsewhere? In other words, is the net impact of the Island Airport that more money leaves Toronto than comes to it? This study does not answer that question either.

Aviation is an intense carbon emitter, compared to other readily available forms of transportation – particularly the short haul flights this Airport is limited to. Have the environmental and economic costs of flying as they impact climate change been considered in this report? No.

Would alternative, and more environmentally friendly, means of transportation, such as high speed trains, provide more economic benefit – even before factoring in the environmental costs? Not even asked in this report.

The federal and provincial governments are investing millions in the fixed rail link between Union Station and Pearson. Once that rail link is opened in 2015 there is no justification for keeping the Island Airport open. Travelers from downtown will be able to get to Pearson as easily as getting to the Island Airport. Why is the TPA investing in what will soon be a “white elephant” of an airport?

A recent study by the TPA discloses that the Island Airport is predominantly used by people from a very small Downtown area – mostly from the business district. Pearson serves the rest of the GTA. Does a luxury service for, mostly, the downtown elite justify the environmental impact? Not asked.

Porter’s not having the success it would like you to believe: according to its own data, its sales (in revenue passenger miles) fell by 25% over the last two months, and by 7.5% this October, compared to last October. If it fails, who is on the hook for the outrageously expensive ($85M) tunnel? Was this potential taxpayer liability considered in this report? No.

Given the horrendous traffic, pollution and noise that this Airport inflicts on Toronto’s waterfront – its recreational jewel, isn’t it better all round for Porter move to Pearson? There are significant costs borne by the local residents, and commuters as a result of the traffic congestion and safety problems from the Spadina to Stadium Road and Lake Shore Boulevard caused by this Airport. Did this report consider the negative economic and environmental impact this Airport has on our waterfront, its millions of users, and its thousands of residents? Again, no.

The Nov. 2, 2012 meeting of the Community and Stakeholder Group, convened by the City of Toronto,  looked at how to address the destructive impact of the Airport on the Bathurst Quay community and its schools, day-care centre, community centre and park. Some extremely expensive ameliorative measures are under consideration. These included burying Eireann Quay and extending the park over top to protect the children at school. Were these anticipated costs included in this study? Not at all.