Inspiration can come in the unlikeliest of places

Posted by: Bulletin Editor December 20, 2016 Comments Off on Inspiration can come in the unlikeliest of places

In this case, it came at Lee’s Palace. The Toronto club was dark, sweaty and noisy—as all such clubs should be—as Chicago’s Off With Their Heads stepped onto the puny stage before a few hundred tattooed, leather-jacketed punks.inspiration 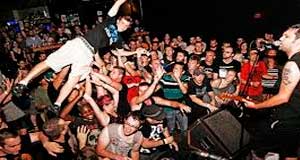 Off With Their Heads band foments inspiration!

Off With Their Heads have an unfortunate moniker for the times, perhaps. But they play songs that are so anthemic, so epic, you think you are watching the bastard sons of Bruce Springsteen, Steve Earle and Social Distortion. They are geniuses.

Most pundits write a year-end column, summing up the good and the bad. It’s a cliché but they’re (usually) fun to write and (hopefully) fun to read. But inspiration for 2016’s edition was elusive. Where to start? Who to give a brickbat, who a bouquet? Where to end?

And then, there it was. Emblazoned on the front of the T-shirt worn by the Off With Their Heads bassist. It was perfect. inspiration

Not so perfect, of course, was 2016 itself. In the main, 2016 was one of the worst years on record. “Woe, destruction, ruin and decay,” sayeth the Bard. “The worst is death, and death will have his day.”

And death surely did. David Bowie died and it was a terrible shock because none of us knew he had been sick. Prince, too, because no one really knew he was an addict. Leonard Cohen and Muhammad Ali slipped the mortal coil, but those passings were not as shocking because both men had lived good and long lives. Bobby Vee, Gene Wilder, Alan Rickman, Anton Yelchin (from the Star Trek movies but more notably in the horror film The Green Room, for this space), all from the creative world, and many more.

In the political sphere, there was former Democratic senator (and spaceman) John Glenn, activist and Chicago Seven alumnus Tom Hayden, Shimon Peres, a giant of the Middle East, British MP Jo Cox, shockingly murdered while campaigning for tolerance and a united Europe, Jesuit priest and activist Daniel Berrigan, Toronto’s Rob Ford, felled by a fast-moving cancer, Nancy Reagan and Boutros-Boutros Ghali, a former secretary general of the United Nations. And on and on.

Death always has its day, as Shakespeare said, so it’s not usually a surprise when it happens – in 2016 or any other year. But 2016?  It had more than its fair share of “woe, destruction, ruin and decay.”

There was the woe and the destruction that befell Aleppo. And what happened at Aleppo was described best by one of our best journalists, the National Post’s Terry Glavin:

“Between the drooling bigotries of the isolationist right and the clever platitudes of the ‘anti-imperialist’ left, the only place left to address the solemn obligations we owe one another as human beings is in negotiations over the codicils of international trade agreements, or in the rituals of deliberately unenforceable resolutions entertained by the United Nations General Assembly. Perhaps Allah will look down in his mercy upon Aleppo, because no help is coming from us. None. This is what we have become. This is the depravity to which we have all sunk. Aleppo has fallen.”

And what of the “ruin and decay” that Shakespeare decries?

Because Trump is a pig (boasting about sexually assaulting women), a fascist (hissing that he will imprison Hillary Clinton once he seized power), the least-qualified person to ever occupy the highest office on Earth (dismissing intelligence briefings, because he says he’s busy and too “smart,” but finding time to meet with an idiot rap artist) – because of all of those things, we tend to think of the president-to-be as a short, sharp shock to the system. And he is, in his way.

More to the story: Oh, the Joy of finding skeletons in Trump’s closet by Bruce Dowbiggin

He will shock the millions of Americans who were idiotic enough to vote against their own self-interests and for him. They will lose their health care. They will see – too late – that they actually lost their job to a microchip, not a brown-skinned immigrant. They will send their sons and daughters off to fight in Trump’s Twitter-inspired wars. Those sons and daughters will come back in body bags – victims of a merciless and bleak lottery in which America’s poor never win. He will shock those people and they richly deserve to be shocked.

Trump is the literal embodiment of the moral and ethical “ruin and decay” that has convulsed democratic politics for too long. The scandals, the cynicism, the lies: Trump did not happen apart from those things. He happened because of those things. He is their logical conclusion.

This year was bad but rest assured: next year will be far, far worse. It will be Shakespearean and all of us will have a bit part to play.

Oh, and the words on the front of that punk rocker’s shirt?

— Warren Kinsella is a Canadian journalist, political adviser and commentator.

Tagged with: Donald Trump inspiration Lee's Palace Off With Their Heads