Historic play and an historic meal

Posted by: Bulletin Editor November 8, 2009 Comments Off on Historic play and an historic meal 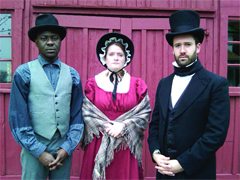 It’s a celebration of Canada’s Rite of Passage into nationhood and you’re invited to the party. The War of 1812, in which Canada handed the new United States its first taste of military defeat, will be celebrated in an historic structure in Old Town Toronto: St. Lawrence Hall.

Some famous historic characters will be there to portray how it was in a theatrical performance arranged by the Old Town Toronto (Promotional) Alliance (OTTA), a group of interested businesses and citizens who promote the historic aspects of that part of Downtown and advocate for its preservation and development as a historic asset. It is here where Toronto began.

The theatrical performance will take place in the Great Hall of St. Lawrence Hall on Nov. 6 & 7 at 7:30 p.m. in celebration as “The Great Canadian Victory Party” and it’s a real party with heritage bread, wine, cheese, preserves and fruits as served in the 1800s. That’s in addition to the show.

Guests will be greeted by Laura Secord, Fitzgibbon, Tecumseh and other historic notables in period dress and attitude, the promoters promise. You’re invited to participate. Tickets are $25 and available from OTTA or at the St. Lawrence Market office in the North Market building. Or visit the OTTA website at www.oldtowntoronto1793.com.