Posted by: Bulletin Editor April 28, 2014 Comments Off on His $1,000 started Toronto’s department-store heart

In 1802 Jordan Post upon his arrival from Connecticut purchased a tract on the south side of King Street from present-day Yonge over to Bay Street for the equivalent of $1,000 in today’s money. There, eventually, he would set up shop as the town’s first watchmaker.

Post became one of the first tradesmen to see potential in the intersection of King and Yonge Streets as the future centre of the wholesale shopping district and is honoured today with Jordan Street, one street west of Yonge and King, while his wife, the former Melinda Woodruff, is remembered in Melinda Street one street south of King.

Thanks to Post, King and Yonge became the new centre of Toronto’s dry-goods industry dotted with little family-run shops eventually growing into the massive department stores of today.

In 1835 George Michie took over Jordan’s Watch Shop and opened his own dry-goods store. To compete with the older, more established dry-good stores, he began to offer his customers a more varied list of products including silk stockings, original art, exotic bamboo furniture, rare oranges, French wines, imported liquor and spirits from his native Scotland. 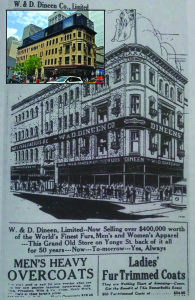 The Dineen building, circa 1897 and today.

As Toronto grew businesses started to spread along Yonge Street and soon many of the stores that once lined King Street were moving to join the newer burgeoning centre of retail at Queen and Yonge, dominated by the more modern department stores, Eaton’s and Simpson’s.

Robert Simpson opened his first Yonge Street store in 1872 just north of King and by the time of his death in 1897 his store had moved up to Queen, taking up the entire the corner southwest corner of Queen and Yonge.

By 1920 Robert Simpson’s little dry-goods store started to expand and by the end of the decade took over the entire block of Richmond, Bay, Yonge and Queen; now home to The Hudson’s Bay Co.

Timothy Eaton first established his Yonge Street store in 1869 just north of King and by the time of his death in 1907 it not had only become the largest department store in Toronto, it also did an extensive mail-order business across Canada.

By 1920 the Eaton’s department store, its factory and Annex store took up the entire block on the northwest corner of Queen and Yonge, directly across from Simpson’s.

Both Eaton’s and Simpson’s are long gone but their buildings remain. The new Eaton Store built in 1977 replaced the older one and became Sears in 2002. It will soon be a Nordstrom department store opening in 2016.

Most of the lesser-known and smaller stores that at one time lined Yonge Street are long gone, their buildings either torn down or hidden behind years of grime, soot and false fronts.

However one of those stores has been lovingly restored and now shows us how many of them would have looked at the turn of the 20th century.

The Dineen Bros., a gentleman’s clothing store, was built in 1897 by architect F. H. Herbert at a cost of $30,000. It was once the showroom and factory of W&D Dineen Co., retailers of hats, caps and fine furs.

The company was started by Dennis Dineen in 1872 in a store at 76 Yonge St. at King, then the centre of fashion.

His family, along with his younger brother William, arrived in Toronto from Ireland in the 1840s.

When Dennis died William took over the company and it was he who moved the business into their own building on the northwest corner of Temperance and Yonge.

The company quickly gained a reputation for superior workmanship fashioning high quality hats, robes, coats and cloaks made from seal, bear and mink pelts from Russia, Persia and Germany.

All this fine work was done in the factory on the top floors of their new building, with a showroom and retail store on the ground level.

However, by the 1930s the company disappeared from local business directories, probably a victim of the Great Depression when fine men’s clothes were no longer affordable to the average businessman.

In the late 1940s and early ‘50s the arrival of suburban shopping malls superseded Yonge Street as the fashion centre of Toronto.

However with the opening of the colossal Eaton Centre in 1977, Toronto’s main drag—after slipping into despair—has been on the comeback trail ever since.

In 2012 Commercial Realty Group (new owners of the Flatiron Building) bought and restored the Dineen Building and in doing so won the Architectural Conservancy of Ontario’s James D. Strachan Award for Craftsmanship on a restoration project.

It makes you wonder what other hidden treasures are yet to be found underneath all the grime and false fronts of the remaining historic buildings on Yonge Street.

Join me this Mother’s Day (May 11) for a “tour and tea” at Toronto’s famed St. Lawrence Market from 1 to 3:30 p.m. Hear fascinating stories of Victorian Toronto and take a private tour of Toronto’s oldest market, followed by a full English tea including currant & cream scones, Empire cookies and finger sandwiches in the beautiful Market Kitchen.