Canadian post-secondary students expect, on average, a starting salary of $50,668 • Males expect more than females: $52,938 versus $48,096 • Actual average earnings for university and college graduates with two years of work experience is $45,000.

As the new school year gets underway, a BMO Bank of Montreal survey suggests that university and college students expect to earn an annual salary of more than $50,000, on average, when they start a job after graduation. By contrast, Statistics Canada reports that graduates are still earning considerably less than that even after two years of work experience.

Statistics Canada reports that students with a degree earned $45,000 per annum, on average, after two years on the job.

Both men and women polled have expectations that exceed reality, male expectations are higher than females. The BMO survey, conducted by Pollara, found that males expect to start at $52,938, on average, versus $48,096 for females. In reality, Statistics Canada says the average salary for males after two years is $48,000, and $43,900 for females.

“While students may need to adjust their immediate salary expectations, the experience they gain combined with a good education will help them achieve a sound financial future and a rewarding career,” said Steve Murphy, Senior Vice President, Commercial Banking, BMO Bank of Montreal. “Graduates represent a young, resourceful talent pool that employers continue to tap into. Many Canadian businesses have opened their doors to students to provide that first job, whether seasonal or full-time.”

According to Statistics Canada, the average starting salary for Canadian post-secondary students can vary depending on profession. For example, those who studied visual & performing arts can expect to make the least, with $31,000 as the average salary within a couple years after graduating. Comparatively, those who studied architecture & engineering will make $53,000 within a couple years after graduating. 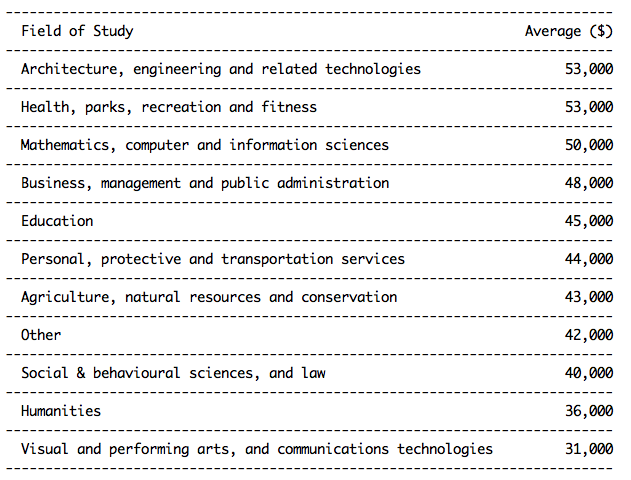 The 2013 BMO Student Survey was conducted by Pollara. Survey results cited in this report are from online interviews with a sample of 602 students enrolled at a post-secondary institution this fall, conducted between July 19 and 26, 2013. As a guideline, a probability sample of this size would yield results accurate to +/- 4.0 per cent, 19 times out of 20.