The Globe and Mail editorial board, which endorsed Stephen Harper and the Conservatives in the last election, has now accused Harper of using his new spying law to create a “secret police force” in Canada.

[1] The new law would give unprecedented powers to spy agencies and police, including the power to detain people who haven’t committed any crime, with minimal oversight or democratic accountability. Yet, few politicians have been brave enough to reject Harper’s fear-mongering.

Many MPs, including many Conservatives, are concerned about these outrageous 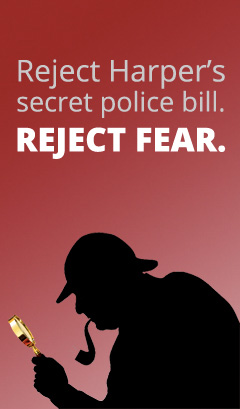 powers and the lack of oversight – but before they stand up to Harper, they need to know that people across Canada will speak out too.

You might be wondering if the laws really are as bad as people are saying. In fact, they’re probably worse. The law has been roundly condemned as reckless and unnecessary – particularly as recent revelations show that spy agencies are already shirking oversight.

Harper’s plan would give spy agencies that were built to target foreign powers the ability to:

[2] Expand their surveillance of citizens. [3] Act like a domestic police-force. They won’t just collect intelligence, they’d be able to intervene in day to day life in Canada. [4] Criminalize some forms of speech, including communication of that’s vaguely defined as the advocacy or promotion of terrorism. But with a history of everyday concerned Canadian citizens being labelled “extremists” in the past, who’s to say what (or who) will fall into this category? [5] The law would also extend the RCMP’s power to detain people who haven’t committed any crime, on the basis of mere suspicion. [6] The truth is: these laws don’t protect our freedoms. They undermine them – and risk silencing reasonable, democratic dissent. [7] Harper is trying to stir up fear to pass these laws and sadly, it’s working, especially on the Liberals. [8] That’s why we need people across Canada to speak out now, reject Harper’s fear mongering and defend our democracy. [9] We’ve got to ask ourselves. Are we the kind of people who give up our freedoms to fear-mongers, or are we the kind of people who will defend our democracy?

Let’s call Harper’s bluff. Please join us and tell MPs and party leaders: handing unfettered powers to spy agencies is reckless, and we won’t let this go without a fight. Sign now: http://you.leadnow.ca/p/reject-fear