Harper sells us out to foreign corporations

Posted by: Bulletin Editor August 9, 2011 Comments Off on Harper sells us out to foreign corporations

Harper is taking us down to third-world status 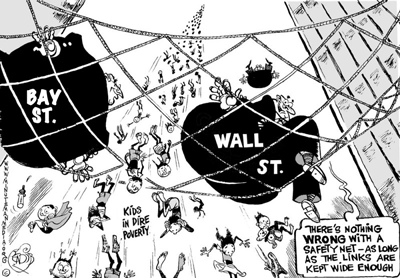 Stephen Harper wants you in the poorhouse. Why else is he making free trade deals with crooked countries? We know how badly you got hosed when the previous Tory, the Rightly Despised Brian Mulroney, signed onto NAFTA.

Your jobs went went to Third-World Mexico and the dirt-poor redneck states in the U.S. south. Now Harper is sucking up to the criminals who run China, a nation ruled by murderers, thieves and torturers. And he’s in Brazil, the murder capitol of South America, trying to get the bandits who run that crooked government to do a free trade deal with us.

He wants free trade (read: “slavery”) with other job-killing states like Greece and Portugal who have desperately poor people to compete for your job. Goodbye Canadian jobs.

Welcome again to the third world. Harper is doing this because, like most Tories and Grits, Democrats and Republicans, he’s in bed with the foreign corporations who tell governments what to do and pay for the right.

Michael Ignatieff wouldn’t have been any different. Say “hello” to middle-class poverty as Canada follows the U.S. into the corporatist sinkhole