Posted by: Bulletin Editor October 23, 2011 Comments Off on Harper rejoices in murder 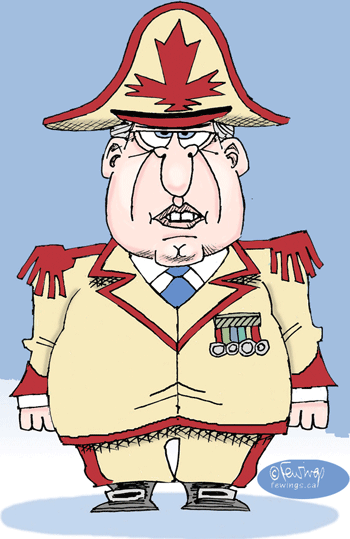 Canada, led by Generalissimo Stephen Harper, celebrates turning over the government of Libya to Al Qaeda and other radical Islamists. They’ve replaced a horrid dictatorship with one presumably more friendly to Big Oil whom Harper openly serves.

We’ll see whether that “liberation” comes to pass for the Libyans who’ve been bombed by NATO.
Now that he’s a Wartime President in the mould of George W. Bush, Macho Man Harper rejoices in the murder of Muammar Gadaffi, a war crime contrary to the Geneva Convention and common decency.

His pretense of defending the peoples of oil-rich Libya is belied by Canada’s nonintervention in other cruel regimes that lack the mixed blessings of oil or mineral wealth. Why, for instance, wasn’t Harper involving our war machines in rescuing the tortured souls in Zimbabwe? Those folks have no oil.

If a nation can’t afford to finance its own occupation, as did Iraq, the current generation of corporatists has no interest in getting involved.