Hanlan’s Point was once known as Canada’s Coney Island

Posted by: Bulletin News September 17, 2015 Comments Off on Hanlan’s Point was once known as Canada’s Coney Island

On the hot sweltering Tuesday afternoon of Aug. 10, 1909, passengers lining up waiting for the ferry to take them to the coolness of the Toronto Islands could see a thin line of smoke rise above their destination out at Hanlan’s Point.

That one stream of smoke would develop into a blaze of such intensity that its finality would not only see the destruction of the historic Hanlan’s Hotel but also mark the beginning of the end of the old way of doing things out on the Island.

In the days before air conditioning and weekend trips for some to a Muskoka cottage, Hanlan’s Hotel was the place to while away the last days of idyllic Victorian summers.

The hotel stood a short walk from the present-day ferry docks and today is the site of an enormous statute to the famous Toronto-born sculler Ned Hanlan who in 1880 won the World Rowing Championship.

Created by sculptor Emanuel Otto Hahn, the statue was first unveiled on the grounds of the CNE in 1926 and was moved to Hanlan’s Point in 2004.

Hanlan’s Point—once a thin peninsula surrounded by water that the British had named “Gibraltar Point” upon their arrival back in the 1700s—is named for Ned’s father, John Hanlan, an Irish immigrant who first went to Owen Sound before arriving in Toronto. 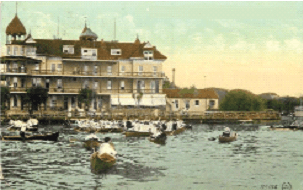 Hanlan’s today is the least built-up and most pastoral part of the Toronto’s Islands, mostly because everything that at one time stood there was either burnt, demolished or moved away.

In 1865 during a severe storm John, his wife Ann and their two sons Ned and Ed were huddled in their small Island shack at the eastern end when a huge wave washed them, home and all, into Lake Ontario. They floated safely to the western end where John undeterred started to rebuild a new home on land that the next year would be officially deeded to him.

A few years later he built his first hotel and by 1880 Hanlan’s Hotel, then newly enlarged, became the centre of Island life. It would be where Islanders picked up their mail, held their first church service and had the first Island telephone installed.

Ned Hanlan began rowing when he was just a kid and would row across the bay to St. Lawrence Market to sell fish he caught that morning.

He soon realized that if he could be the first to arrive at the Market his fish would therefore be the freshest and soon after a legend was born.

Ned’s arrival into Toronto Bay on July 15, 1879, after winning a big race in England, was the largest celebratory regatta in our city’s history.

Another sports legend commemorated at Hanlan’s Point is baseball great Babe Ruth. After the fire Hanlan’s Hotel was never rebuilt but the wooden baseball stadium next to it was this time in concrete and on Sept. 5, 1914 19-year-old Babe Ruth hit his first professional home run in the newly opened Hanlan’s Point stadium.

If you continue up the road from the ferry docks past the languid lagoons and the wide expanses of playing fields you will stumble across an oval-shaped clearing about two acres in size facing the lake. There are a few picnic tables and some chunks of cement on its lakefront.

It was here from 1883 to the late 1950s that the Lakeside Home for Little Children once stood. It was built as a summer retreat for underprivileged children, most of them suffering from tuberculosis in Toronto’s crowded inner city. Every June these children—some still in their hospital beds—would be paraded in a long line of carriages from the Hospital for Sick Kids (then on College Street) down to the Island docks. In September crowds would form once again to see their return.

This Island refuge continued to be a fresh-air haven for thousands of children up until 1928 when a new country home operated by Sick Kids opened in Thistledown. The rambling mansion was for a time used as emergency housing during WWII and was by the time of its destruction in 1956 a housing complex known as Chetwood Terrace.

Using an 1910 city map I counted 122 cottages lining the beach at Hanlan’s plus the giant baseball stadium, two merry-go-rounds, a boardwalk, a theatre and a dance pavilion.

By the time Sunnyside Amusement Park opened in the city’s west end in 1922, Hanlan’s Point’s own fun fair was in a steady decline.

In 1937 the enormous stadium was demolished and construction of the Island Airport began (completed in 1939).

In 1956 the last carnival ride was dismantled on Hanlan’s Point and everything else was either moved to Algonquin Island or demolished.

Today Hanlan’s Point with its clothing-optional beach is peaceful, quiet and serene. Long time Island resident Jimmy Jones once told me when he comes down to the Hanlan’s ferry docks to greet friends he can still hear swirling around in his head the sound of the carousel and children’s laughter he first heard back in the 1930s when Hanlan’s Point was known as Canada’s Coney Island.

2015-09-17
Bulletin News
Previous: Why did Jesus heal on the Sabbath?
Next: Youth unveil eco mural at Toronto’s First Cricket Field