The unofficial Belizean Embassy is located on Winston-Salem, N.C.’s stately Runnymede Road, just west of Hanes Park and RJ Reynolds High School. That’s where Michael Touby, the self-described “ambassador of heat” lives, and it’s where he strategizes about the growth of a hot pepper sauce import business he first linked up with almost 30 years ago. 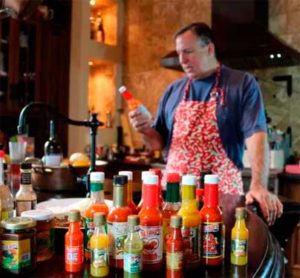 Touby’s analogy to an embassy might sound a little overblown or self important — and he says it partially in jest — but considering that Touby says his business partner Marie Sharp is responsible for Belize’s No. 2 export behind lobsters headed for the Red Lobster chain, it may not be that much of an exaggeration.

I couldn’t confirm Touby’s claim — bananas and sugar might actually be the Central American nation’s leading exports — but the Belize-based pepper sauce purveyor is producing 600,000 cases of the sauce annually, according to Touby. Marie Sharp will soon be able to ramp up dramatically to 1.8 million cases, with 12 bottles to a case, thanks to a production-side investment last month, with the lion’s share going to Japan.

Touby’s relationship to Sharp dates back to the late ’80s. He’d gone to Loyola in New Orleans with plans to be a journalist, but after school followed a friend from Belize who wanted to export US goods back to his home country. On a trip to the small former British colony facing the Caribbean the friends encountered Sharp’s sauces everywhere and switched course, forming a relationship with the woman behind the hot sauce and bringing it north.

But in 1991 with a baby on the way, Touby split. He needed to make real money, and went into medical communications field.

“From a passion perspective,” he said, standing in his spacious Winston-Salem kitchen with a pot of lentils on the stove, “I lost my food-industry passion.”

That’s why the army of sauce bottles that stood on his kitchen island in front of him were so significant. After 25 years away from the industry, now retired and working on various passion projects, Touby’s life has come full circle.

He reconnected with Sharp at the New York Fancy Food Show earlier this year. She’d had an ugly split with his former business partners long ago, almost as soon as he left, he said. His old friends had taken Sharp’s brand Melinda’s with them, but she’d continued producing and put her own name on the labels. And she’d done quite well for herself.

Sharp is celebrated as a celebrity in Belize, he said, creating popular food items far beyond heat-laden pepper sauces and posing for pictures with fans on the street. She was the first to popularize a sauce relying on habanero peppers in the United States — originally thought to be too hot for the market in this country — and was inducted into the Hot Sauce Hall of Fame this year alongside Huy Fong Foods’ Sriracha Sauce founder, the founder of Frank’s Red Hot, the man behind the world’s hottest known as Death Sauce and none other than Sam Garner of Winston-Salem’s own Texas Pete.

Since reconnecting with Sharp, Touby has been back down to Belize, and almost cried when he saw how his former partner’s business has grown in the 25 years since he changed tracks. Now they’ve teamed up again, with Touby planning to help her launch a tweaked and redesigned line, likely in early 2017.

He’s not the one importing her sauces; to try them, you need to go online, request it at restaurants or reach out to Hot Shots Distributing in Charlotte, Touby said. But he is the brand ambassador for the Marie Sharp’s sauce brand, and a damn good one, too.

Touby set out a small bowl of rice, another with his garlicy lentils, two others with cream cheese and a plate with smoked corn on the cob. As he prepared, he described the fresh ingredients Sharp uses including carrot and onion, her commitment to being pesticide-free, her creative use of grapefruit pulp, prickly pear and orange pulp. She makes non-fermented pepper sauces relying on habanero, a move that distinguishes her from regular hot sauces, several of which utilize cayenne.

In Belize, people put her prickly pear sauce on fish or avocado. He puts it or the fruit-forward one with grapefruit on sushi, Touby said, joking about hot sauce in his bag, swag. One is almost like a steak sauce, making use of tamarind, green mango and raisin and a sweet habanero pepper sauce doesn’t contain much heat and pairs with the cream cheese.

Touby grabbed a colossal hunk of Amish butter from his refrigerator to coat the corn he’d grabbed out of his backyard smoker, then suggested adding the green nopal habanero sauce to the cob. Despite initial trepidation, the pairing is remarkably satisfying and worth making a tradition.

The standard lineup of Marie Sharp’s pepper sauces are hot, and pretty incredibly so even at the mild benchmark. From there, several including No Wimps Allowed and Beware reach a threshold that feels mildly dangerous if consumed straight. But add the mild or hot to some food like Touby’s lentils, or even the matzah he provided, and you’re on safer ground. The grapefruit and smoked varieties are serious stars, and highlight the dexterity of Sharp’s operation.

Touby is doing everything from research and development to modifying these recipes for Sharp’s forthcoming line — really every element beyond production. It feels good to be rekindling his passion, which he said never fully dissipated. Touby may have thought in 1991 that his interest in hot sauces would be in a sort of permanent hibernation, almost like an athlete turned into a spectator. But it turns out it just took 25 years for the chance to step back into the arena to return.

Previous: Do bikes freeload on taxpayer-supported roads?
Next: The pursuit of pure joy