Naming the new George Brown College student residence in the West Don Lands area after black businessman Thornton Blackburn and his wife Lucie would be a source of inspiration for Geneve Gray.

Gray is black and studying business at the college where she serves as director of finance and operations for the student association.

The Blackburns, who escaped slavery in the U.S. and lived in Corktown in the 1800s, established Upper Canada’s first cab business. It was the jumpstart for the development of future cab companies. 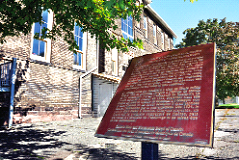 “The fact his small idea now is traveling through Toronto is a big inspiration. His small seed just travels” Gray said in an interview.

“Coming from African descent that would be one of the few honours in our community to have a building named after an African-American family,” she said.

The George Brown student residence, which will open after the 2015 Pan Am Games, is near the same intersection. Students will be able to look out their windows and see the homestead of their namesake.

The college will make a decision about the naming in mid-October. The student association has been campaigning for the Blackburn name and so has the West Don Lands Committee (WDLC).

“The college has an incredibly diverse student body and this is an incredible way for the college to act on its commitment to diversity,” said Wilkey.

After escaping slavery in Kentucky, the Blackburns settled in Toronto in 1834. When Thornton died he his estate was valued at $18,000—a big sum in those days and a testament to the Blackburns success in business.

Their first cab stand was at Church and King. The business, with its one red and yellow horse-drawn cab, was known as The City. The Blackburns reached the point that they became founding members of Little Trinity Church on King St. E. near Parliament.

Blackburn worked with Globe newspaper publisher and Father of Confederation George Brown in the anti-slavery movement. They were executives on the Canadian Mill and Mercantile Association that raised funds to build businesses to employ fugitive slaves. They’re buried just feet apart at the Toronto Necropolis Cemetery.

Blackburn and his wife were the subject of the first interpretation of Upper Canada’s Fugitive Offenders Act. The governor of Michigan wanted the couple extradited to America but Upper Canada refused and so became known as a safe haven for an estimated 40,000 slaves who fled here.

“The fact our school is named after George Brown and the fact they worked together in the 1800s, that is enough to say the residence should be named the Blackburns Residence,” said Gray.