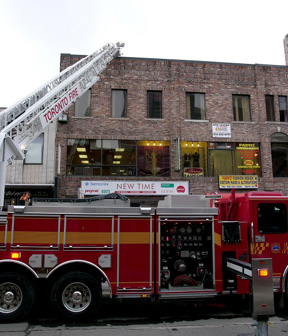 A two-alarm blaze on Yonge St. shuts down traffic for 3 city blocks Feb. 1.

The fire started in a block of stores on the east side of Yonge, just north of Dundonald at about 2.30 p.m. Toronto Emergency Medical Service said there were numerous people in the building when fire broke out, but all managed to escape without injury.

Police blocked off a section of Yonge St. from Wellesley to Isabella as a concern because of the size of the fire.  According to the fire department, the street closure was precautionary due to the possibility that the blaze could rapidly raze the entire block of older buildings.

Two ladder trucks were seen extended to the roofs of the three-story buildings backing onto Dundonald.  Smoke was visible for several blocks as firefighters knocked out windows to vent the building, and eventually contained the blaze at about 3PM. 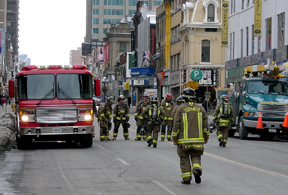 Although the exact cause of the blaze has not been immediately determined, a local business owner said it was likely caused by burning refuse in a chute above street level.  A number of retail businesses were forced to close shop this afternoon because of smoke and water damage.

Toronto fire again responded to the scene this evening, because of continuing alarms located near 593 Yonge St.

The cost of the damage has not been estimated at this point.

2007-02-02
Bulletin Editor
Previous: What is the future of the All Saints Church?
Next: West Queen West triangle gains new ally against OMB