Funds needed for organ Congregation has raised half

Posted by: Bulletin Editor March 1, 2015 Comments Off on Funds needed for organ Congregation has raised half 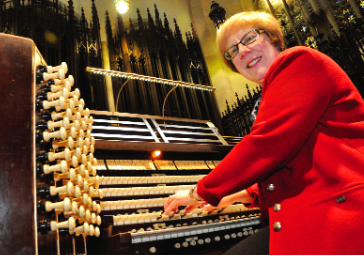 The organ at Metropolitan United Church on Queen St. E. at Church gives comfort to many with its music and now it needs help.

Some of its essential parts are literally turning to dust. Dating back to 1930 it’s the largest pipe organ in Canada, built by the Canadian company Casavant Freres. It’s getting old and needs $200,000 in repair work.

Many of the original leather pouches that blow air into the pipes to make the notes are almost 85 years old. They’re drying up, cracking and leaking air.

“I’ve seen some of the pouches. It’s just powdery. No wonder (some of) the pipes don’t speak. There are dead notes all over the place,” says Patricia Wright, the church’s organist and director of music.

The organ is a teaching instrument for University of Toronto students. It also plays an important role in the church’s outreach program for people seeking respite from a busy day and also for the homeless who come for the weekly Out-of-the-Cold meal served downstairs.

“Some of them (homeless) come up stairs just for a warm place to sit and meditate and the music is going on. They say it makes a difference in (their) lives to listen to the music,” says Wright.

The organ has five keyboards, each with 61 keys plus 32 foot pedals that play base notes. In addition, it has panels on each side with more levers to pull to make the notes louder and softer. That’s a lot to remember, but Wright gets it right.

The organ’s longest pipe is 32 feet. The smallest is about 2 cm, says Wright, using her thumb and forefinger to illustrate its tininess. That little pipe “is very, very high pitched.”

Wright, who’s been with Metropolitan United for 28 years, grew up in a little town outside Pittsburgh and attended a small Presbyterian church. “I heard the organ and I thought it sounded like angels singing.” She wanted to learn to play it.

Wright took lessons and pretty soon she was playing the organ every Sunday at that little church throughout her high school years. She took lessons at Carnegie Mellon University in Pittsburgh and did her graduate work at Yale University. She also studied in France.

Fundraising for the hand-made, wooden organ began three years ago. So far half of the $200,000 required has been raised. “This congregation is very generous. It’s certainly a lively congregation and very supportive of music,” says Wright.

“They realize the value of music, not only in worship services but as outreach to the community.”