The West Don Lands Committee (WDLC) met recently to discuss various ongoing projects and innitiatives that will impact the inhabitants of the West Don Lands area. This month’s special guest was First Gulf.

First Gulf is a real estate development corporation, who have such buildings as the Globe and Mail Center (King and Front) in their portfolio. Derek Goring, the vice president of development for First Gulf, was at the WDLC meeting to discuss their latest venture, a business complex at 21 Don Roadway. 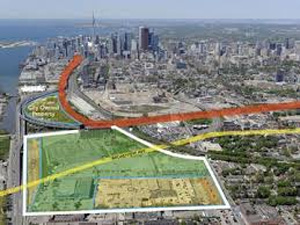 The proposal is to build 12 million square feet of office, retail, and institutional space over 60 acres of land. “It’s important for the vitality of a city like Toronto to have a variety of commercial nodes to ensure office space users have different options. This project will also help maintain a good supply/demand balance in the office market Downtown,” says Goring.

“Over the next 25+ years the population of the GTA will grow by about 2.5 million people and many of those people will have jobs that require office space. The current trend is that employees and employers want to be Downtown and because many development sites in the core have been developed (or are going to be developed) for condominiums there aren’t enough good office sites left to accommodate this growth.”

However, First Gulf faces a great many challenges to reach their estimate of having a tower built by 2022. “Two main hurdles stand out; first, we need to connect this well located site to the existing transportation infrastructure (GO transit, TTC, Gardiner/DVP, Lake Shore Boulevard, Eastern Avenue) to provide access,” says Derek Goring. “Second, we need to get the site out of the flood plain of the Don River. The main challenge is that all these projects require funding.”

“The good news is that there are existing initiatives that have been ongoing for a while that contemplate all these things (e.g. naturalization of the Lower Don, environmental assessment for the east section of the Gardiner, GO Transit service expansion, etc.), and we hope that our project acts as a catalyst to confirm funding and get construction started.”

And the biggest lynchpin in  the future of the project seems to be the city’s construction of a transit hub at, or at the very least nearby to the location. “This is because it’s a prerequisite to attracting any office tenants,” reports Goring. “Employers will only go to locations that employees can easily get to, and because of the congestion in the city, great public transit service is absolutely necessary.”

“In addition, we think that a major transit hub at the east end of Downtown will help relieve congestion from Union Station.”

The 21 Don Roadway proposal is still in very early days. They are looking to have meetings with stakeholders this fall which will include local communities, city staff and councilors. In tandem with that, First Gulf is hard at work on master planning the site, which will be focused on the placement of buildings and parks. It will also be focusing on the physical connections, such as pedestrian walkways, bicycle paths, transit, and traditional roadways. Interested residents can find out more on First Gulf’s website, at www.firstgulf.com.