It was the abominable dread held by right-thinking voters that brought Premier Kathleen Wynne another four years at Queen’s Park.

Anyone but the deadly Progressive [not!] Conservatives won the day for a Liberal Party majority. Rather than chance a return of the evil Mike Harris Tories who demolished our city and merged it with the dissimilar suburbs. To ensure that Tim Hudak couldn’t win, voters retained the Liberals and abandoned any hopes by the NDP that they could be dealmakers.

Harris, a golf pro and ex-teacher who could look competent in a suit, had a good speaking voice and was malleable by fascism-oriented handlers who pumped evil philosophies that were called, “The Common-Sense Revolution.”

Harris and his nasty crew, including Tim Hudak and Tim’s now-wife Deb Hutton, were part of the Harris-handlers crew that wreaked havoc on the education and health systems, sold a highway to gouging foreigners, created oligarchs in the hydro sector and intended to sell that sector as well.

The result in hydro is taxpayer-funded companies each stuffed with elite-staffed boards of directors collecting rich salaries and bulging bonuses. Dopey Mike said at the time that he wanted to make Hydro operate like private industry. Private enterprise, in the parlance of right-wing nuts, is the Holy Grail of economics.

It makes it sound as if selfish, profit-obsessed money interests are somehow forced by a purgatory known as The Market come up with the most efficient ways to operate and keep prices low.

While at the other end, governments—rich with endless taxpayer dollars and borrowed money—have no incentive but to spend every penny and borrow even more to pay to their supporters.

In reality, businesses come up with the most efficient ways to create monopolies or oligopolies and gouge the marketplace for every possible penny. It’s government’s duty to keep them in check on behalf of the public whom governments are expected to serve. When governments are corrupted, it’s always at the hands of businesses bribing officials in legal or illegal ways.

Businesses are only interested in profits. And that’s not a sin. That’s a good thing and is to be expected. It’s what makes a The Market serve society…so long as it’s kept in order by honourable governments operating in the public interest.

Entrepreneurs create the finer things in life and provide the most vital things for life.

The privatization party that was Dalton McGuinty’s Liberals were scandalized by arms-length public service corporations that ventured into private business. Ornge, the disastrously incompetent air ambulance operation, was headed by sickos who tried to sell things they learned or developed with your dollars to profit themselves. That’s just evil.

But the worst evil of all would be a return to the Mike Harris regime of selling off the commons to businesses. Already we let foreigner Nestle suck up our water and sell it back to us in plastic bottles. An honourable provincial government wouldn’t tolerate that! Why do the Liberals?

I’ll give you an example from Bolivia where a privatization scheme, backed by the utterly evil International Monetary Fund and the World Bank, let Bechtel Corp. rape everyone in that poor nation until finally a rebellion ended it. But it shows you where things would be headed under a Tory government and (be very afraid) perhaps yet under the Grits.

In Bolivia, Bechtel was entitled to charge individuals for rainwater they collected. Many states in the U.S. now have laws prohibiting individuals from collecting the water that lands on their roofs. (For more info, click here) 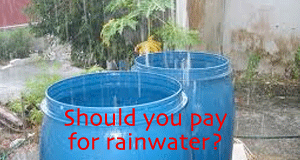 ope and another one with Asia, could subject us to such tyrannies that could be enforced by foreign troops (including Mexicans) that Harper has already agreed are allowed to enter our soil. The Trudeau kid, Justin, also thinks a free-trade deal is a good idea. Perhaps he’s too callow to recall how NAFTA wrecked our economy and shipped our manufacturing jobs off to low-wage Mexico and the redneck U.S. south. Or maybe he’s too shallow.

But back to the reason Wynne won so big: Dread of what Tories have become as exemplified by Mike Harris and Tim Hudak.

Perhaps the Ontario Tories can rebuild themselves and renounce fascism (which merely means collusion between big business and the state). Let’s hope the Wynne Grits will do likewise.

2014-06-13
Bulletin Editor
Previous: Stunning condo in the heart of St. Lawrence Market district
Next: Song about pet loss to raise money for the Ontario SPCA