This year, 10 film shoots, more than one each month, have occurred at a Riverdale residence, and local homeowners would li ke to see it end.

An aging heritage mansion at 450 Pape Ave. and Riverdale Ave. has become a hot spot for filming this year. Filmmakers are currently shooting the movie “It”, based on the novel by Stephen King, and earlier this year an episode of CBCs popular show Orphan Black was shot there. 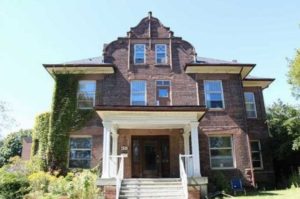 Old mansion at 450 Pape Avenue in Riverdale is a popular venue for filming, much to the disruption of some neighbours.

On several occasions film crews have brought in huge generators and have shot scenes well into the night. Neighbours received notice of the current shooting less than the required 48 hours stated in the bylaws from the City of Toronto Film Office.

This tenth film shoot is also well beyond the two per year allowed by city bylaws. Although this area is zoned residential, it seems that the site is a film studio with events happening every month.”

“The current “It” production arrived at the site July 18th and is may not finish filming until August 20th.”

Contact has been made with the Film Office, Councillor Paula Fletcher and Mayor John Tory to request that the bylaws be followed.  I would like the Film Office to follow their own bylaws.

As someone who was always supportive of the  film industry in Toronto, I am is very disappointed in the way these situations have been handled.

My neighbour, Mrs Velez across the street at 443 Pape Avenue, is also dismayed at all the activity.  She says, “It is getting too busy.  Not only during the day but at night, too.”

From Withrow Avenue, another immediate neighbour said, “for all the filmings this year, I have never received a Notice of Filming and why am I not surveyed when the loud HVAC system is 20 feet from my property.”

These filmings have been affecting the lives of the families in the neighbourhood as the film crews have made requests for them to not work outside on their properties while there is filming, and to remove items such as lawn signs from their own property because they were in the background of the shoot. Parking has also become a problem as dozens if not over 100 people show up sometimes.

It works both ways. If they want us to be respectful of their work, the least they can do is follow the city bylaws for filming in a residential area.

Previous: Russia’s weakness is its economic policy
Next: Shava is a community organizer of More Moss Park