I am so happy to see that the façade of the former Old Fish Market restaurant (Market Street just south of Front) has been totally refurbished, making it appear almost like it did when it first opened back in 1858 when it was built as the Armory Hotel. 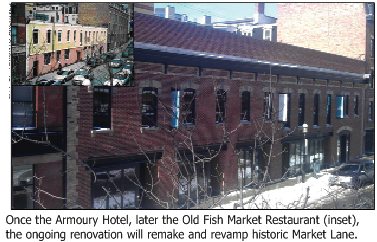 At one time the market area was filled with little hotels and while a few still exist they have taken on other forms. There is the Royal LePage office at 187 King E. at George which, when built in 1879, was known as the Little York Hotel. A few doors down along King is the former Nesmith Hotel (c1880), now an antique shop.

There were numerous hotels where Market Square on Front Street E. now stands with the most famous being the City Hotel that was first built in 1825. It’s now the location of the deli counter of the Metro grocery store.

Around the corner on Market Lane stood one of the most famous hostelries of early York, Franks Hotel. There in 1820 in a ballroom on the second floor was held the first stage play made up entirely of local actors.

None of these early hotels had more than a few bedrooms and were used mostly by farmers coming in from the outlying areas to sell their produce at the Market.

As Toronto grew and became more industrialized larger and better-equipped hotels started to rise and replace the more utilitarian ones. In 1854 the railroad came to Toronto and with it also came a demand for more hotel rooms as more people than ever before were arriving daily.

At the same time The Esplanade was being expanded to allow more room for trains; the Market Train Station, the Toronto Armory and City Hall were also built. All three of those buildings were demolished to build the present-day South St. Lawrence Market. But the centre block of the city hall was saved and looms over the interior of the Market.
In the middle of this mid-19th-century building boom the Armory Hotel, built in 1858 and so named for the Toronto Armory across the street, quickly became a hangout for soldiers coming in after a hard day doing drills.

When plans for a newer and larger St Lawrence Market were being drawn up, along with a larger city hall and armoury for the Queen, Bay and University Avenue area, the Armoury Hotel on Market Street underwent a makeover.

In 1893 the City of Toronto put out a directory listing the leading businesses of the day and wrote the following the Armory Hotel:

Toronto has a number of comfortable and well managed hostelries, and among them the popular, old established Armory Hotel under the control of Mr. J. J. Coulter, who has since made considerable improvements about the premises with newly fitted and re-furnished rooms throughout in a modern style, and is well prepared to receive and entertain guests for the price of $1.00 per day.

The average price for a room in a lesser hotel back then was about 50¢ a day and a dime could get you a shared room with about 20 other men. But if you were really desperate, for a nickel you could rent a bed in a flop-house for six hours.

The more upscale Armoury Hotel had 30 guest rooms including a smoking parlour, three sitting rooms, a large dinning room and a well-stocked bar serving the choicest foreign and domestic wines plus a wide variety of liquors, ales, beer and cigars.

Local legend has it the hotel was also one of the first in the city to hand you a menu at dinner as before you ate what was put in front of you.

As the city grew, and the Market area which was once the bustling centre of town started to decline, the stylish Armoury Hotel become just another dive in a neighbourhood by then filled with flop houses renting to a transient clientele.

In 1948 a fire swept through the old hotel, then being used as a warehouse for the Wilkens Fruit Co., injuring nine people. It made the front page of the Toronto Star. During the 1950s and ‘60s the building was used as an auto-parts warehouse before being converted into the Old Fish Market Restaurant in the mid 1970s.

When the restaurant closed in 1998 there was talk of turning the building back into a hotel and adding a 9-storey condo on top.

However the late great developer Paul Oberman, who beautifully transformed the former CP Train Station at Summerhill into a jaw-dropping liquor store, wanted to do the same for the historic building on Market Street.

There was very little if anything left of the original hotel’s interior so it was demolished to enlarge the Front Street liquor store. However the Market Street façade was painstakingly restored, bringing back a little bit of Toronto’s early hotel history that is nothing less than superb.

On a different note, a few issues back I wrote about Carmen Lombardi of Ivan’s Salon who after 50 years retired as a barber and for many of those years cut my hair. I received a few dozen calls from readers curious to know who cuts my hair now. Well, it’s Win Win Mar, the niece of San San Maw (both from Burma), who in 2009 bought Ivan’s from Carmen and his partner Bruno Specchi .They bought the salon in 1979 then located in the King Edward Hotel and where in 1962 Carmen, newly arrived from Italy, gave me my first haircut in Toronto. The lineage of Ivan’s Salon (now on Victoria Street) dates back to 1903 when the King Eddy first opened exactly 110 years ago this May 11.