Ecurie Ecosse Powered By Black Bull made a winning start to their assault on this season’s Avon Tyres British GT Championship over the Easter Bank Holiday Weekend at Oulton Park where Marco Attard and Alexander Sims bounced back from a rare mechanical failure to claim maximum points in race two.

Fresh from finishing fourth on debut at the recent Blancpain Endurance Series round at Monza, the legendary Scottish squad was back in domestic sportscar action at the picturesque parkland circuit in Cheshire with their Barwell Motorsport-run #79 BMW Z4 GT3. 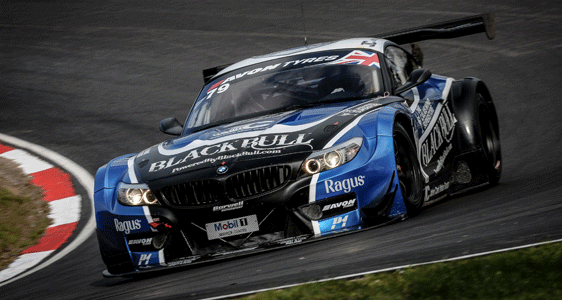 The sort of pace that propelled the team to third overall last season was immediately evident during Saturday’s two qualifying sessions when BMW factory driver Sims secured pole position against his fellow Pros by a healthy 0.3sec. That was after Attard had underlined the car’s potential by setting the third fastest lap amongst the Am contingent.

A decent start to Monday’s opening one-hour race saw Attard maintain third over the first 10 laps before a rare gearbox failure forced his retirement. It came as a bitter blow to the Ecurie Ecosse crew who, having consolidated their position early on and with Sims waiting in the wings, felt confident of mounting a victory challenge later in the race.

Nevertheless, that disappointment only served to stiffen the team’s resolve ahead of the day’s second race. Armed with a new gearbox, Sims made the perfect getaway from pole before establishing a small advantage over the chasing pack during the early stages. But if the appearance of the Safety Car after only 12 laps undid much of the Briton’s good work then the improbable set of circumstances that followed would seriously threaten the team’s victory chances.

With the mandatory driver change only permitted after 25 minutes, Sims and the other front-runners were heavily penalised when the pit window opened just as they came around to complete another lap, while those further back could dive in and legally make their stop under Safety Car conditions. That unfortunate but nevertheless unfair advantage ensured that Attard would only re-join third after relieving Sims a lap later.

Their bad luck would ultimately even out however when the two leaders collided later in the race. Having inherited the lead, Attard managed the ensuing restart to perfection before keeping the chasing Porsche at arms length over the remaining laps to score a well-deserved victory.

Marco Attard: “Obviously I’m delighted with the win at Oulton Park, a race that changed direction so many times during the hour. But after all of Alexander’s hard work I was glad to see victory come our way and believe it was well deserved! The opening race was more disappointing as we were holding a very comfortable third place when the gearbox went, but the team did a great job to get us back out for the all-important second race.”

Alexander Sims: “Overall it was a great first weekend. We demonstrated very good pace, the team worked well and Marco has made fantastic progress. Starting in the top three for both races gave us a great platform from which to build, so it was unfortunate that the gearbox issue ended our first race early. Of course the second finished exactly the way we had hoped; pole position, fastest lap and victory was spot on. It sets us up well for the rest of the season, and now we just have to keep that level of performance going.”

Mark Lemmer, Barwell Motorsport Team Principal: “The results we have achieved this week are superb and testimony to the hard work and dedication put in by everyone concerned. The pole position and win in British GT has been made even more satisfying by the fact we outperformed the factory entries from Aston Martin, Bentley and Nissan!”

Despite not scoring in race one, their 25 points for winning the second sees Attard and Sims sit fourth in the Drivers’ standings ahead of Rockingham’s double points-paying two-hour round on May 4/5.

A BIT MORE ABOUT ECURIE ECOSSE
Ecurie Ecosse was formed in 1951 by Edinburgh accountant David Murray. Under his leadership the team achieved a huge number of international race victories, the most prestigious being overall victory at the Le Mans 24 Hours in 1956, and finishing 1st and 2nd in the same race in 1957. Ecurie Ecosse took the racing world by storm and to this day has an unprecedented reputation as a winning formula. In 1983 Ecurie Ecosse Association Member and Edinburgh businessman Hugh McCaig took control of the team and lead it on to further great success, including:

*This is awarded for the best performance in terms of the combination of speed and fuel efficiency.