When a military regiment is disbanded, its Colours are said to be ‘laid up’, formally, in a church or other solemn repository. Its veterans continue to meet and remember over the years, in dwindling numbers, until a time comes when the veterans’ association is itself disbanded and its own Colours are in turn laid up. The Royal Canadian Military Institute on University has been a welcoming home to many of these sad, solemn, poignant leave-takings over the years but never, perhaps, to an equivalent in civil life – the ‘Last Hurrah’ gathering of the retired veterans of Simpson’s Department Store on September 13.

The Simpson’s main store was built in 1894 and stood proudly on the Yonge-Queen-Bay-Richmond block for many years as the flagship of a country-wide chain. Simpson’s was purchased by The Bay in 1978, which wound up the Brand in 1991. The location continues in operation as The Bay. The veteran Simpson’s store managers and staff continued to meet for lunch once a year, but this year their leaders Captain Jamie Burton (Ret’d) and Peter Hooker decided it was time to ‘lay up the Colours’ with a final farewell gathering, appropriately enough at RCMI.

Over 80 Simpson’s veterans gathered in the RCMI Library to reminisce and say hello to old friends, many perhaps for the last time, and to toast their own ‘Colours’, the bronze Simpsons plaque that stood for so many years embedded in the building wall at the corner of Queen and Yonge. 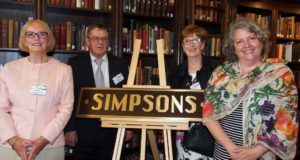 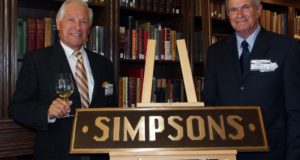 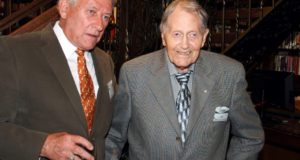 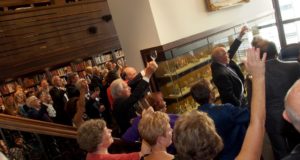 ‘The Last Hurrah’ – A final salute over University Ave. to the Simpson’s building , once clearly visible from the RCMI.